Sauna build in Central Wisconsin comes off without a hitch

I had used saunas a few times growing up and always enjoyed them but was never ‘into’ the whole sauna experience.  It was more a less a nice comfort every few years.  This changed when I visited a friend in Seattle in early August of 2013.  Unbeknownst to me, he had recently built a sauna in his backyard.  Nothing super fancy, an electric unit that seats three comfortably (or four if you want to squeeze), a window view and an exterior shower.  My wife and I headed into the sauna, it felt great and said aloud ‘Man, I should build one of these at our place’.  She replied with ‘Then go for it!’  My mind started racing.  Could I really do this?  Where would I put it?  How long would it take?  I could barely sleep that night!

Upon returning to my home in central Wisconsin, I started some Internet research on saunas.

I initially planned for an indoor unit, to go in an unfinished area of the basement.  A prefab kit was affordable and would be easy to assemble.  But it would be located in an area where a future bathroom would be constructed and I couldn’t come up with a prefab kit that would mesh with a functional bathroom layout. And then I started thinking about stepping out of a hot sauna into…a bathroom.  Not nearly as enjoyable as stepping out into the cool Seattle air and looking up at the sky.  The outdoors were calling…

An outdoor unit would have location issues.

I had long term plans to build a rather large storage shed in the backyard and there wouldn’t be room for that and a sauna.  I toyed with the idea of a larger structure to house both but finally realized what do I need a shed for?  We had made it years without one.  And what fulfillment comes with building a shed?  The shed plan was scrapped and the outdoor sauna was a go.

The climate in central Wisconsin is quite different than that of Seattle.

How best to deal with the cold? Fortunately, I stumbled upon Saunatimes early in my research and it proved invaluable.  The concept of a changing room, an 8’x12’ structure to make use of standard construction material sizes, etc.  It was all gold.  As many before me, I got out a length of string and started laying out the building.  Some stakes in the ground and the project officially started.

I opted to build my own structure rather than have a pre-built shed or similar installed.

I wanted more control over the construction methods and also to get the full experience and fulfillment of building from the ground up.  ‘Real’ construction started August 24, 2013, with the first plunge of the shovel.  Work progressed naturally from there.

Having a full-time job with a fair amount of travel and two young children meant working on the sauna when I could.

Lack of funds and storage space meant I had to purchase materials as I needed them.

My stall in the garage often existed as a warehouse for storing of lumber, sheathing, shingles and other construction materials until I could get to them.  The building really started to stand out once I got the walls up.

The process was slow.

I was essentially working on this project entirely by myself.  Carrying tools out to the sauna, carrying them back in the evening.  Running extension cords, coiling them back up.  Tensions with the wife, not spending enough time with the family.  At times I wanted to put the project on hold but with winter coming, I knew I had to at least get the structure sealed up for winter.  The temps were dropping and working light getting shorter…
Leaves falling off the trees, need to finish the exterior work.  Siding going up slowly.  Too cold to stain it once installed so I stained pieces individually in the garage, let them dry and then carried them out for installation.

The structure is looking great but not there yet.

The exterior is mostly buttoned up but not without some work having to be done in the snow.  That is no fun but the project had to move forward.  Once buttoned up, the plan was to take a break but with winter coming, it sure would be nice to have the sauna up and running.  There is still a few pieces of siding to put up but that will need to wait until spring, simply too cold to work outside.  So I pressed on with interior work: wiring and insulation.  Without really being able to work outside, the sauna is full of tools and building materials.  Not the best working environment. 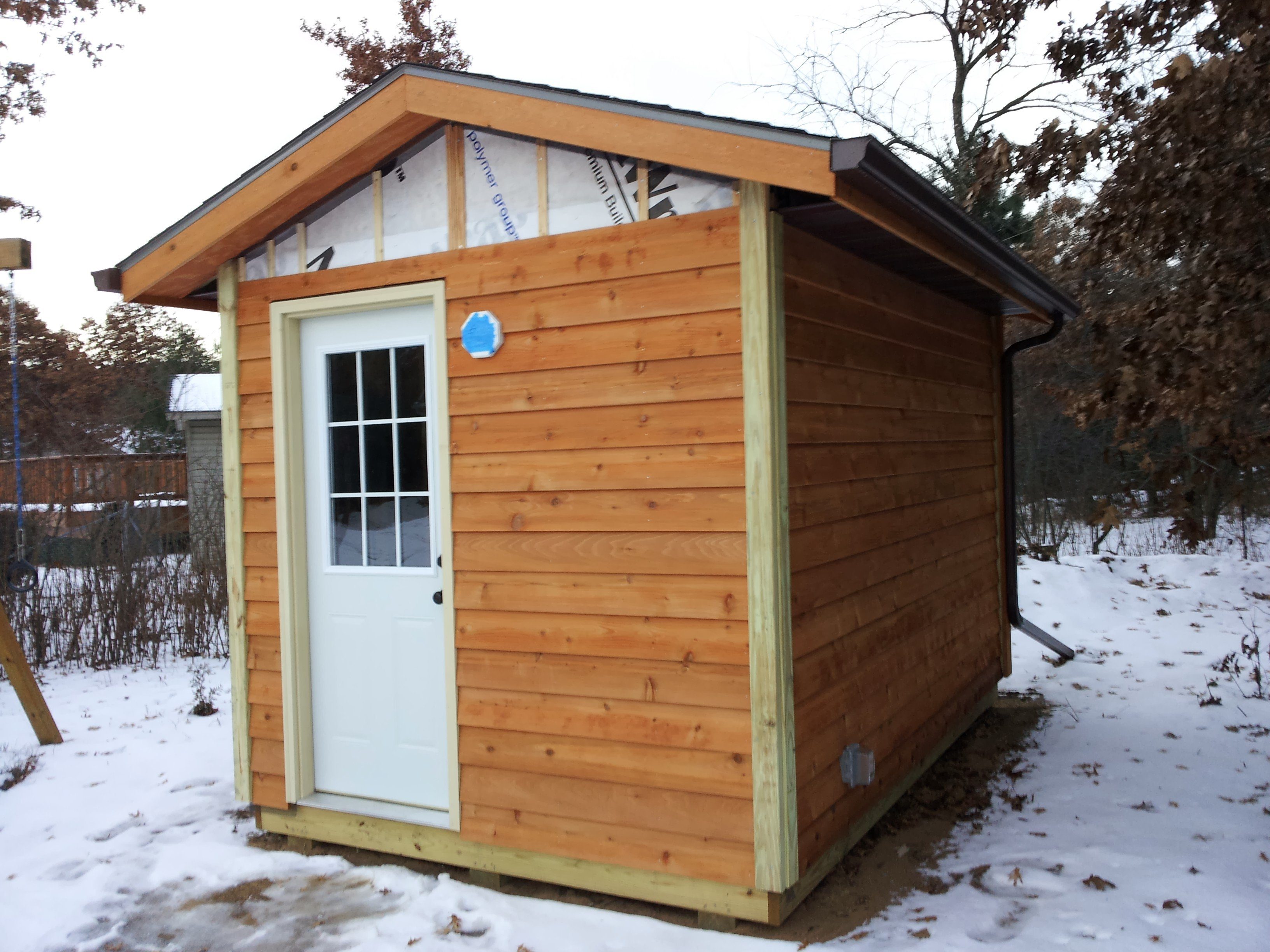 It is now February and the light is at the end of the tunnel!

Rough construction is complete and it is time for tongue & groove siding, benches and all the finishing touches.  Due to the snow, tongue & grove is cut in the garage, carried through the house and then out to the sauna. 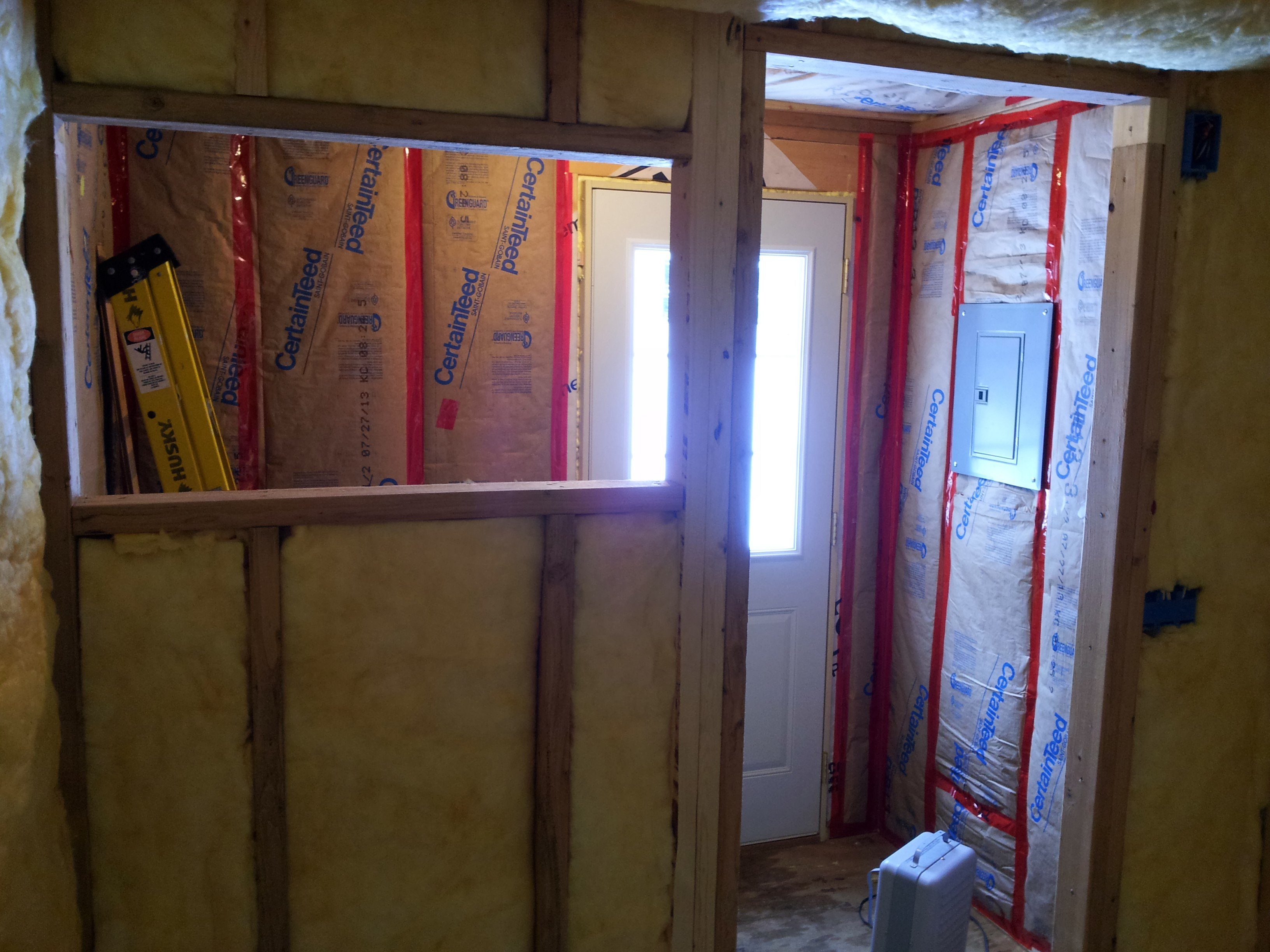 Compressor and tools are carried back and forth daily.

Finally, the sauna is ready for use.  First session was the evening of Thursday, February 6.  Temp outside is -5, temp inside is 170.  Yes, that is an electric heater you see.  Wrestled with the idea of a woodburner but for a variety of issues, electric made the most sense for me.

So there you have it, a backyard sauna from start to ‘Finnish’.

It took a long six months but with the consistent below zero temps here in central Wisconsin lately, it has been a blessing.  The wife has had a couple hectic weeks at work and she definitely appreciates taking a few rounds in the evening.  All the construction stress of the last several months is all but forgotten.  Moon is fairly full right now and the night skies are clear.  So cool to be able to step out of a 170 degree room into a -5 winter wonderland, steam rolling off the body.

Okay, getting cold, time to head back in for another round… 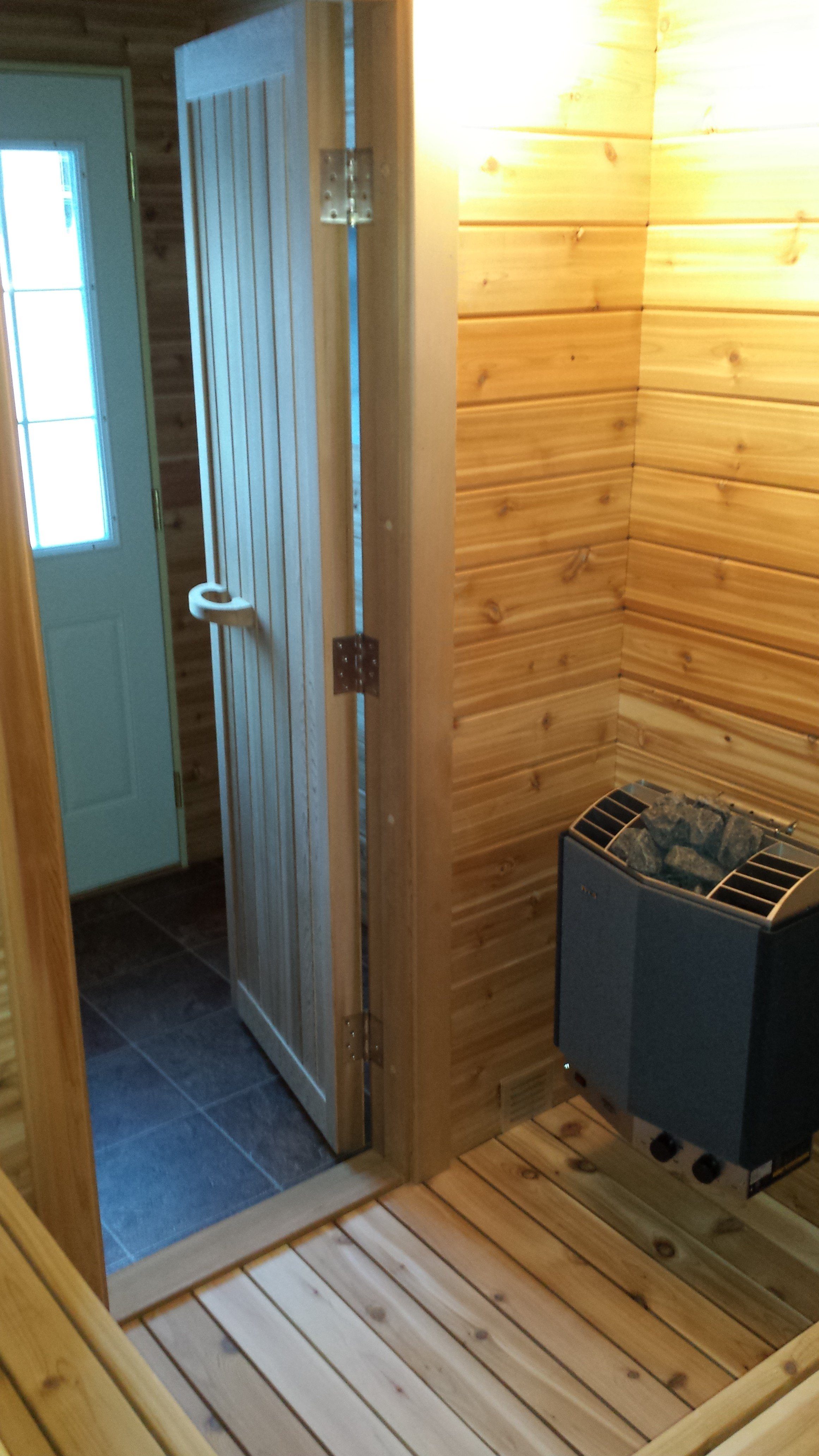 “Sauna’s too hot”, “turn up the heat!”: One simple suggestion for a health club manager.

“We build our saunas one time, and get to enjoy them for the rest of our lives”

DISCLAIMER: Sometimes, I like a product so much that I invest my time (and sometimes my own resources) to help get it off the ground. I most often post product info without any financial compensation at all.