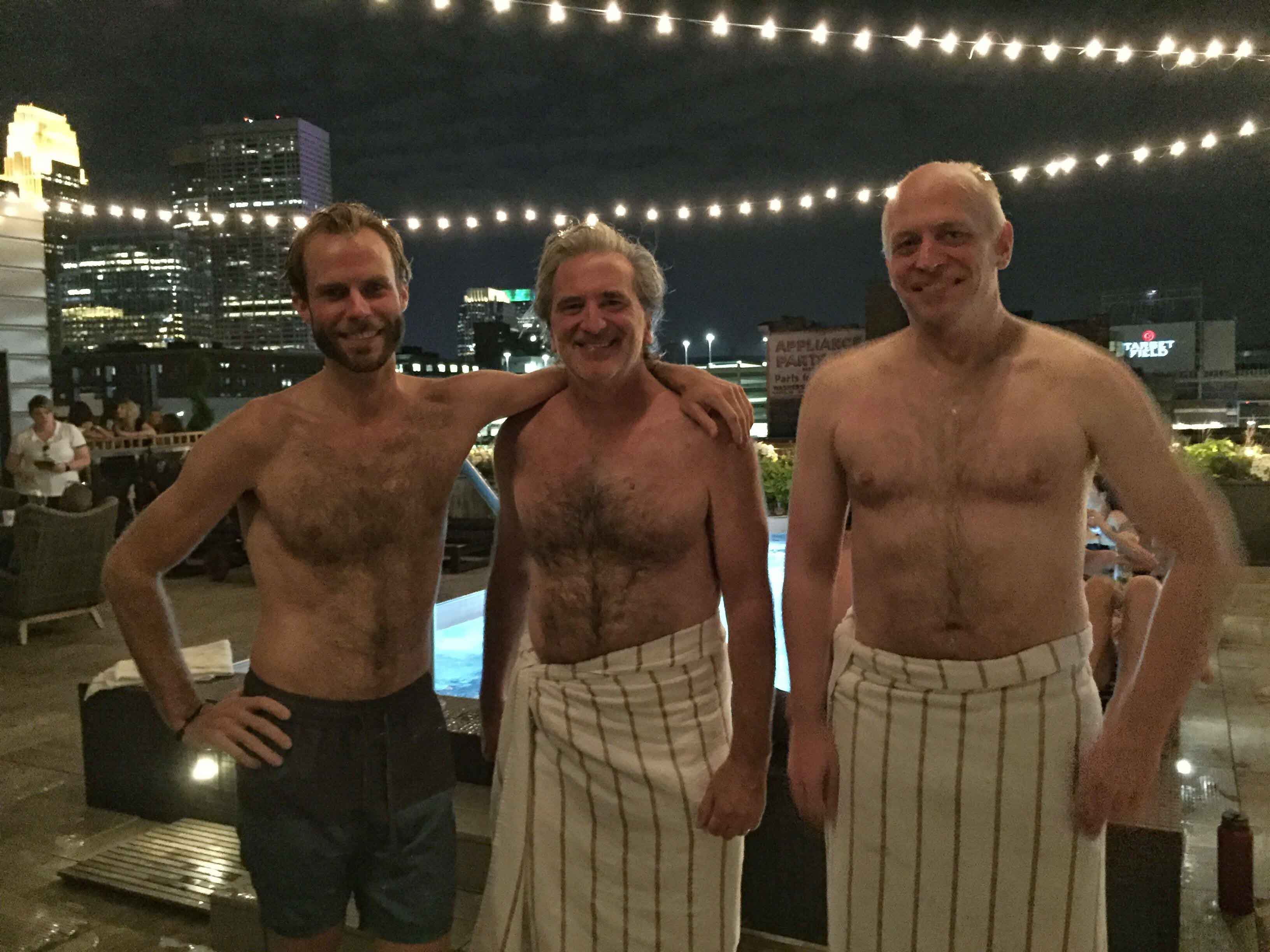 Two saunameisters faced off at the rooftop sauna “preseason steam” at the Hewing Hotel this past Friday night.  Being asked to be a judge for this Aufguss session between a German (Alex ) and American (John Peterson) is akin to being asked to judge a French poetry reading between, say, Serge Gainsburg and Snoop Dogg.

As with the German (Alex ) there is just something about the pronunciation of phrases like:  “in zee moment” and “let go of zee stress” that is, well, frankly, more resonating than his American competitor.

JP, living up to American stereotypes of optimism and exuberance, prepped us for his aufguss session by having us gather around his clipboard, pre sauna, like a Texas football team, where he walked us through his three round Aufguss playbook.  “Here’s what we’re gonna do..”

Both began their aufguss sessions with a bit of talk, then repeated rounds of water on the sauna rocks with towel waving and flapping (to circulate the steam throughout the hot room).  Both had good technique.  Both were able to towel snap above sauna bathers on the lower bench, to deliver waves of air to those of us on the upper bench without hitting anybody.

Alex did seem to be able to work his towel into tighter confines within the group, but this may have just been me being influenced by his accent vs. any actual superior technique.  This wasn’t the rat tail snap from our bulleyed high school locker room youth, but the meister having both hands on each corner of the towel.  An even wave of “dragon air” waifing across our bodies, as we sat on the sauna bench eyes closed, meditatively, taking it all in.  Then came the helicopter towel wave:

The helicopter waves were comparable, but JP brought his own multi colored towel, possibly an act to either look better on camera or possibly to influence the judge.  But I tend to think he chose his towel like a hockey player chooses his own hockey stick.  This towel looked to be a bit smaller and perhaps weighted differently than those plush soft spa type towels offered by the Hewing.

Sitting on the sauna bench, we are at the mercy of a aufgussmeister standing in front of us.  He is in the commanding position of adding water to sauna rocks (in strategic fashion) and waving a towel around the sauna hot room (also in strategic fashion.)  Having this command could produce a negative bi-product akin to giving the best man the microphone.  Yet, both receive high marks for not rambling like orators at Marble Arch.  We all enjoyed appropriate moments where the steam did a lot of the talking.

Yet a judge has to be critical and pick a winner.  Tough to do.  Both JP and Alex are deeply passionate about a good sauna experience.  Each helped bring the sauna bather “into the moment” to relax: a tall order for us, given our urban location in downtown Minneapolis on a horn honking late Friday evening.

For each Aufguss session, we were a group of about 15 or so.  This turned out to be an ideal number for us to disperse ourselves around inside the large sauna, with three level of benches inside Hewing sauna hot room.  Guys and girls, skewed towards the millennial age bracket.  Like with yoga, some want to do their own poses on their own, yet there are many that like to be guided through the yoga practice. Like with bicycling, some want to ride on their own, others like to meet up as a group (often wearing the same jerseys).

As such, Aufguss sessions can feel similar to yoga sessions or group biking.  The chitter chat is similar.  We have just shared an experience.  The endorphin rush is around us.  We all feel relaxed, and unarmed.  Between sauna rounds, after a cold shower and ice bath, we find ourselves hanging around and, well, interacting.  Not stupid talk, like in a line at a coffee shop, but real, unpretentious conversation, sans mobile devices and distractions.  “In zee moment.”

Tough to have Saunatimes put in a position to have to choose a winner between this USA vs. Germany preseason steam.  I tried deflecting the burden over to my fellow participants, but I couldn’t get any discernible negative feedback about either candidate.  I tried to judge based upon the degree of smiling faces between sauna rounds, but this seemed universal to both candidates.  But unlike regular season soccer matches, this is the World Cup.  And this judge was not going to ask for penalty kicks.

The precision of towel work, the attention to water on every sauna rock, at experienced pace, and, well, the (“zee”) accent of Alex, in the end became the deciding factor.

On this night, September 14, 2018, air drying while gazing at the Minneapolis skyline, Saunatimes declares:  Germany: 1  USA: 0.

As of this writing, dates will be announced for future Aufguss match opportunities.  check here.