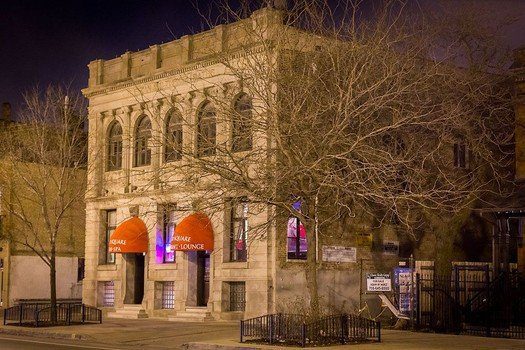 I had the pleasure to meet up with sauna enthusiast, Saunatimes reader, and Chicago area resident Officer Kevin O’Connell.  Kevin graciously introduced me to the major sweatlodges in Chicagoland.  Weather we call them saunas, spas, sweatlodges, or bathhouses, the common element is that these facilities all strive to provide an authentic experience: superb hot rooms that send you out the door hours later feeling refreshed, restored, and rejuvenated.   To an outsider visiting in the midst of a big mean city – the third largest in the country – we are able to discover three oasis that wave flag of exceptional health and wellness.

I also had the pleasure to meet with owners and managers of each facility and will be reporting more on each for future articles here.  For now, as we meandered our way through the old parts of Chicago, Kevin filled me in on the history of Chicago bathhouses.  It was rush hour, so we avoided the plugged highways and instead cut our way through the neighborhoods, old Eastern European neighborhoods, past old parks and beautiful architecture, where gentrification is happening and who can argue with that?  But we talked mainly about sauna and like meeting someone who enjoys the same music, a new friend quickly becomes an old friend.

My wife is from Iron Range Region of Northern Minnesota and she introduced me to my first real wood burning sauna over 20 years ago. It was early May at her best friend’s cabin on Sturgeon Lake.  Early May in Chicago means shorts and t-shirt weather. Up North it means ice fishing season just ended and the lakes “may” be ice free. I remember the amazing heat and the smell of birch burning and then jumping in the ice cold lake less than 20 feet from the sauna. I was also chastised for my Chicago pronunciation of SAWNA, and told it was pronounced SOWWNA. No matter how you say it the intense heat and cold plunge has me continually looking for Sauna Paradise. I was later introduced to my wife’s aunt who had a home/cabin on a family plot of land on Lake Vermilion. Her maternal grandparents had a farm between Tower and Embarrass MN and the cabin less than 5 miles away was their retreat. Her Aunt married a man from the area who was 100% Finnish and he built a wood burning sauna on their lake property.

My favorite sauna of all time was on a Mid-November trip there. A cold, still, star filled night. I jumped in the cold lake and thought (this lake could freeze tonight) I awoke the next morning to see a sheet of ice had covered the entire bay, not to retreat again until the following May.

A Lifetime quest for a good sauna

At home I have continued my quest, using a local health club electric sauna, cold water on the thermostat, water on the hot cedar walls, and stove rocks to rival the heat from those northern stoves. I am able to equal the heat but not the feel. I have also creatively come up with ways to cool down, finding a open door to the outdoor pool deck in the winter has been very nice. I am guessing someone working at the club is wondering who is making snow angels in a swimsuit at 5am. I now have a small following at the health club disappointed when the sauna is not pre-heated.

About 10 years ago I was introduced to a Chicago Russian Sauna by my brother in-law who was also searching for the sauna experience he had on a visit to Russia. We found it! at the dilapidated Division Street. Bath in Chicago’s Ukranian Village. After walking down the dark steps we entered a shower room with a running cold faucet into a plunge pool (I was told the water came directly from the depths of Lake Michigan) it was similar to the ice water of Northern Minnesota. In the dark sauna the heat seemed to go through your body.  I now know it was the massive thermal mass of thousands of pounds of rock superheated by a gas furnace. I continued to go there for several years although it became more and more obvious that major renovations were needed. We were heartbroken when it closed.

Although it was a bit of a drive my shift schedule as a police officer allowed me many weekdays off and my co-workers shared the same days off. It became a regular occurrence to get the kids to school and meet several other officers at a central location at 9:15A.M. Since it was after rush hour we easily made the drive into Chicago and were waiting at the door when it opened at 10am. First in we usually had the place to ourselves for a couple of hours until the lunch crowd entered. We had already had a couple sauna rounds and maybe a beer by lunchtime. We would then have a fabulous lunch maybe another round of sauna or a nap in the recliner and head back to the suburbs by 2:15P.M. and be home to pick up the kids from school by 3P.M.

Since then Division Street Bath has had a million dollar facelift and has been renamed Red Square Spa.

I think it is like the quote ” no man ever steps into the same river twice for it is not the same river and he is not the same man”  I think you can replace the word “river” with the word “sauna.”  When you go to a place like Red Square or Chicago Sweatlodge it is always a different experience solo, small group, large group all have a different vibe.  You have talked about the solo sauna being very relaxing.  I have had the solo sauna there in many different ways.  A few times I have arrived early on a weekday and had both saunas to myself.   I have also had a solo sauna with many other people present, when everyone in the room is speaking Russian you feel like you are alone in a foreign country (not in a bad way)   It feels nice to walk out of this little place in a working class Chicago Neighborhood and feel like you have traveled to a far off foreign land.

King Spa in the house

In addition to daily trips to the health club sauna and regular trips to Chicago’s Russian Saunas, I have also visited King Spa (a Korean Sauna in the suburb of Niles IL).  This is a great place to bring your wife, girlfriend, kids, or other friends. It is a very large building with two complete bathing areas within the men’s and women’s locker rooms. These Asian style bathing areas have several hot pools ranging from around 95-100 degrees to lobster pot heat. There are no swimsuits allowed and attendant makes sure you shower before entering the pools, the good news is there is very little chlorine used. There is also a cold plunge pool that fluctuates between 60-70 degrees, and a steam room along with stand up and sit down (Asian style) showers.  The sauna area is co-ed and you are given King Spa loose cotton shorts and t-shirts. There are about 9 different relaxation rooms with different heats from 100-170 degrees. Each room has a mat to lay on and has different healing properties including a salt cave, charcoal room, mud room, oxygen room, pyramid room and several other relaxation rooms.

The highlight for a true sauna lover is the Korean Sudatorium!

The King Spa Sudatorium is like a igloo made of cement blocks, they build a oak fire in the room and let it burn for hours, the coals are removed and burlap mats are placed on the floor. It is a true smoke sauna and the heat and thermal mass are amazing!! The heat can be overwhelming for newcomers or if you enter when they just opened. Easily 200 plus degrees and maybe even 240-250 depending on when you enter. After a few minutes sitting on the floor on a mat you can exit and cool down in a walk in freezer room kept below 32 degrees immediately next to the Sudatorium. Other positive features are a full scale Korean Restaurant, a movie theatre with big leather reclining chairs, nap rooms, game rooms, tv rooms, and lots of lounging areas. I will do a full review later, needless to say my wife and kids love this place!!!

I now work weekdays and try to get to these three establishment as often as possible. The biggest decision is which one. My dream – like many of the 612s – is to have one closer to home or maybe in my own backyard. Glenn Auerbach told me “a rising sauna tide raises all saunas” I could not agree more!