Finally! A Children’s Book About Saunas 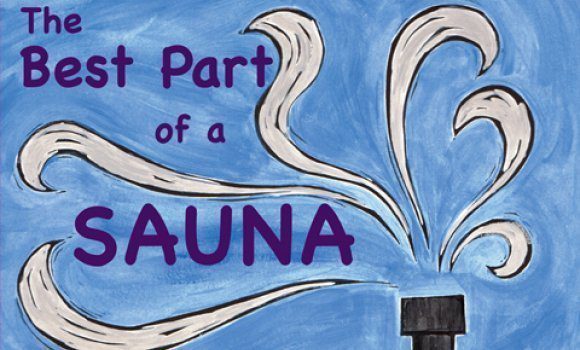 The survival of any tradition depends upon youth participation and education. When children learn about the sauna and experience them with their families, they often continue that practice for their entire lives. They develop an appreciation for the strong family ties that a weekly sauna can foster. There are almost no children’s books that promote sauna culture – until now.

Sheryl Peterson lives in “the icebox of the nation” – International Falls, MN, so she knows a thing or two about the way that saunas can transform a frigid winter. I too, am from International Falls and have known Sheryl for a long time. That why I was excited to hear that she has written a wonderful book called “The Best Part Of A Sauna.”

Saunatimes.com has permission to reprint the article from the local newspaper that discusses the book in more detail, so please read on.

With the release of a new children’s book, Sheryl Peterson says she is excited to join the club of non-fiction authors.

The International Falls woman recently released “The Best Part of a Sauna,” a picture book about a youngster spending a summer evening taking a traditional sauna with “gramps” and “nana” at the family’s lakeshore cabin.

Peterson is no stranger to the writing world. The retired Title I teacher began writing fictional books for children in 2000 with the Creative Company, a publishing company based in Mankato. Twenty-two non-fiction books later, she has written about everything from Machu Picchu to the Egyptian pyramids to the Florida Marlins baseball team.

“I’ve done a lot of research,” she said. “Some of the places I’ve written about, I’ve never been … And I had zero knowledge of baseball.”

While each of the books she’s written are near and dear to her heart, holding a hard copy of “The Best Part of a Sauna” in her hands had a little more meaning.

“It is my first fictional book published,” she said. “I’ve done a lot of picture book stories over the years and received a lot of nice feedback, but nothing was ever published. I was thrilled when someone wanted to publish this story.”

The book was released by Raven Productions, Inc., an independent publisher in Ely, that, according to a release, seeks to publish books that encourage children and grown-ups to explore, share and protect the natural world.

Peterson said the book is based on her own experience as a grandmother and the time spent in the sauna at her Rainy Lake cabin with her grandchildren, who the book is dedicated to. The story tracks the suspense of starting the sauna, waiting for it to warm up and ultimately reveals what the best part of a sauna really is.

“We use the sauna to wake up in the morning and relax at night,” she said. “It really is like an activity for the family.”

From gathering kindling and building the fire in the old sauna stove to sitting in the steamy heat and taking a refreshing dip in the lake to enjoying the loon calls from the dock, the book includes all the memory-making parts of a typical summer evening on a north woods lake. The book is written for ages 3 to 8, but will appeal to anyone who has a fondness for this Finnish tradition, a release said.

The book wouldn’t be complete without pictures and Peterson said she was fortunate enough to select award-winning artist Kelly Dupre of Grand Marais to illustrate the book.

“She just does such fun, lively stuff,” Peterson said of Dupre’s artwork.

The author said each picture in the book stemmed from a carved linoleum block which was then printed on paper and then had acrylic or water color added to it.

“They’re absolutely beautiful,” Peterson said of the illustrations. “The art is really fun and different. I really like how everything turned out … When you send out your words, you never really know what an artist is going to do with them. Kelly did a great job.”

Peterson credited her local writers group made up of several local authors for their help and advice while she wrote the book.

“They heard the story a million times and helped me so much,” she said. “They helped with everything from the title to how to get words to fit just right.”

Peterson said collectively, members of the writer’s group have many submissions out for publication and they no longer refer to the waiting period of hearing back from a publisher as “it’s out in the black hole, instead we say it’s out in the sea of hope.”

“I still have a couple things out there in the sea of hope,” Peterson said with a laugh.

The book concludes with Peterson’s non-fiction experience and lists historical facts about the sauna, tips for first-time sauna users and other facts with child appeal. In addition, it also provides the correct pronunciation of a sauna, which is SOW-na, not SAW-na like many Americans say, she said.

“It was fun to learn about all this Finnish background,” she said of the research done for the book. “The tradition is Wednesday and Saturday nights is when saunas are taken … It is still a real common thing.”

“The Best Part of a Sauna” is available locally at Ronnings and City Drug. Peterson said she’ll be at City Drug for a book signing from 10 a.m. to 1 p.m. Nov. 9.

Sauna music in the time of corona

3 thoughts on “Finally! A Children’s Book About Saunas”