Heat in Haute Style from the WSJ

The Wall Street Journal is back at it.  WSJ journalist Anne Marie Chaker wrote this feature for the Dec. 29, 2010 front page.  In today’s issue we have this article about sauna and architecture in Finland.  Clicking through to view the slideshow is highly recommended.  Thanks to fellow sauna enthusiast Tony Richter for sharing this article.

For those blowing through, I’ve copied and pasted J.S. Marcus’ article here:

By
J. S. MARCUS
Oct. 17, 2013 7:02 p.m. ET
The home sauna is anything but a luxury in Finland, where ritual sweating is such a part of daily life that there are nearly as many saunas as there are homes. But luxury is becoming a selling point for Finnish saunas as more Finns break the habit of sweating in ordinary wooden boxes, choosing instead to surround themselves with atmospheric works of customized design. 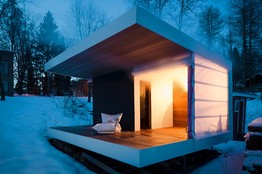 Modern Finnish sauna construction is generally divided between those built inside a house or apartment, usually featuring an electric heat source, and free-standing structures, outside a country house and often near a body of water, that use wood-burning stoves.

A third option, known as a smoke sauna, does away with contained heat sources. Instead, a flueless fireplace is used to heat up special stones; after the smoke clears, sauna revelers enjoy the moist hot air and the trace of smoke.

Smoke saunas have a bad habit of burning down, and newly built ones still resemble old-fashioned wooden shacks. But anything goes when it comes to the design of electric and wood-stove saunas.

“Before sauna design was a matter of function—just the benches and the heater,” says Kalle Saarinen, a sales manager for a division of Harvia Oy, Finland’s market leader in sauna heaters. “Now it’s about atmosphere.”

Another major force in Finland’s sauna revolution is the growing role of architects, who increasingly regard wood-based sauna design as a subcategory of sustainable architecture. “Wood is trendy,” says Jorma Mukala, editor in chief of the Helsinki-based Finnish Architectural Review, who often features cutting-edge works of sauna design in his pages. Meanwhile, some sauna owners are doing away with wood, says Mr. Saarinen, choosing natural stone and tiles to adorn sauna walls.

According to Harvia, the average cost of a Finnish home sauna is about $4,000. Here is a look at some recent ambitious Finnish sauna projects—with general price tags to match—that incorporate distinctive design elements.

Old meets new in this architect-refurbished sauna near Seinäjoki, a city in central Finland. A former smoke sauna from around 1900, later used as a granary, was given a new life, in conjunction with the building nearby of a summer home for architect Anssi Lassila and his family. The interior fittings were fashioned from local spruce, and the new wood-burning sauna stove was built by Mr. Lassila himself—”brick by brick,” he says. Cost:$20,300

A new four-bedroom house is the setting for this large indoor sauna in Espoo, Finland’s second-largest city and a part of greater Helsinki. The sauna features an unusual interior combining black benches with contrasting natural-finish walls. The sauna anchors a home spa area, featuring an indoor and outdoor Jacuzzi as well as a spacious terrace.

A retired couple in their 60s needed a sauna for their country house near Heinola, a town 90 minutes north of Helsinki, and they decided on a smoke sauna. They took a number of fire-safety precautions, including using a flame-retardant concrete floor. They also protected the walls with noncombustible materials. For heat, they installed a stone-lined open stove from the Finnish firm Sisu, developed for use in smoke saunas. The couple use the sauna, which is situated about 60 feet from a lake, in warmer weather.

This log-cabin sauna, on the banks of the Siikajoki River in northern Finland, was designed for the property of a family’s country house an hour away from Oulu, north Finland’s largest city. The sauna, by local architect Lauri Louekari, has a striking circular entryway facing the river. Built out of pine and aspen, the sauna can comfortably fit six; the structure includes two covered terraces. The stove is heated with wood but the structure has electricity to power lamps in the sauna room, dressing room and terraces.

Helsinki architect Juho Grönholm, a principal in ALA Architects, is known for his public buildings, including Helsinki’s soon-to-be-built central library, but he tried his hand at sauna design after he inherited a family summer home near Hämeenlinna, 60 miles from the capital. Together with his architect wife, Riikka Ylimäki, he designed and built a lakeside sauna featuring a striking black-and-white facade, created by contrasting pitch-black plastic film with white sailcloth. Instead of using Finnish wood for the ceiling and floors, they added a dose of luxury with imported iroko, a tropical hardwood, giving surfaces a rich shine. Cost:$40,600