Helsinki “guerrilla sauna” pops up, is enjoyed, suffers arson, and gets rebuilt all under the radar but appreciated by authorities

It all started when a couple guys found a discarded sauna stove in the woods outside Helsinki.  They reclaimed the stove, brought it to an urban industrial location by the shores of the Baltic and built a sauna around it.

There were no rules.

Wait, there is one rule: “Don’t be stupid” which was hand painted on the outside wall of the sauna.

The sauna is available 24/7.  Folks are asked to bring their own firewood and clean water.  (no salty Baltic water on the stove, please: rust).

Below is January 2018 article copied and pasted without permission from Nordic Business Insider.

Since the article, the Sompasauna suffered a fire at the hands of an arsonist on April 21, 2018.  The coolest part of the misfortune is that the sauna was rebuilt by volunteers, reportedly, within 24 hours, probably while the ashes were still smoldering.

Info here, regarding the fire.  What deserves note is that police and firefighters were dispatched.  They put out the fire and investigated, calling the fire a deliberate act of arson (not from the sauna stove).  But at no time were there any governmental schenanigans about trying to shut down the possibility of a future rebuild, nor was there any efforts to issue citations to the crew that originally built the sauna.  In other words:  sauna sanctity.

And please click through to this article on estoniasaunas.com, for an awesome write up, including detailed photos of Sompasauna.  Priceless photos actually as they capture the spirit of the original sauna before the fire, including:

Sompasauna is arguably the first ‘guerrilla sauna’ in Finland – a makeshift sauna for all to enjoy, run by a community of volunteers. Guerrilla saunas are beginning to pop up all over. However, as Sompasauna’s Jaakko Keso points out, “This is part of a bigger cultural phenomenon which includes also Siivouspäiva and Ravintolapaivää.”

Citizen activism with a do-it-yourself spirit is a growing movement in Finland.

Sompasauna is part of a growing Finnish movement for local residents to make more use of unused urban spaces.

Siivouspäiva – which translates to ‘Cleaning day‘, or more accurately set-up-your-own-flea-market day – and Ravintolapaivää (‘Restaurant day’, or rather set-up-your-own-restaurant day) are special events which enable anyone to set-up operations pretty much anywhere they like without the usual bureaucracy – freed from regulations concerning health and safety, taxable earnings and so forth.

As a whole, the movement is referred to in Finland as ‘Kaupunkiaktiivisuus’ – roughly translated as citizen activism. City residents come together in a collective do-it-yourself spirit. But whereas setting up a makeshift flea market or restaurant is relatively easy, saunas don’t share their mobility and are limited to the places with a swimmable waterfront. In the end, most people would agree saunas are generally better with a dip now and then and a wash at the end.

Sompasauna is only the tip of the guerrilla sauna iceberg.

“These other saunas have no affiliation with Sompasauna but we have no problem with their existence and they get nothing but encouragement from us. We want many more of these popping up in the future.”

The guerrilla saunas are generally set up somewhere without official approval so their existence is undercut with an air of anticipation as to how long the sauna will be in operation before the marching orders are given to vacate.

Sompasauna’s origins are a bit cloudy. Who originally decided this was a great sauna spot is unknown, but the story goes that he/she/they just decided to make a sauna from left over bits and pieces of what was once the surrounding industrial wasteland and it didn’t take long for it to be a ‘best kept secret’ in Helsinki with more and more people coming from all walks of life to contribute to and enjoy the community atmosphere. The mysterious primordial beings could well be mingling amongst the sauna lovers and no-one is any the wiser, but it seems they don’t bother to go about tooting their horn.

Sompasauna has only recently received some official recognition.

Sompasauna is run on a purely volunteer basis and it’s only recently that a Sompasauna Association was established, but its purpose is predominantly to keep some minimal quality control. Besides the volunteers needed to keep operations and maintenance going, Sompasauna is also reliant on donations. Keso is happy to report that there were lots of generous donations during the regular summer parties. And that’s certainly very well because with the sauna in use 24/7 during the summer months, the sauna stove goes into meltdown and is in need of constant replacement.

Keso explains that they have had both positive and negative experiences in dealing with the decision makers at the Helsinki Municipal offices. Some are all for what they are doing but others not so much. Recently, the Sompasauna community was the recipient of the 2016 Helsinki Culture award for “how it represents Finnish sauna culture, Sisu (guts and determination) as well as being an outstanding example of how citizens can take over unused space in the city, making it a better place to live.”

As an award from the city of Helsinki it represented the first official acknowledgement of Sompasauna and finally some vindication.

Sompasauna’s future is as cloudy as its origins.

Sompasauna is located right on the edge of the Smart Kalasatama city development, which will eventually be home to apartment buildings as well as a massive business and retail park. That spells Sompasauna’s demise pretty clearly on the horizon. It has already been threatened with closure for a couple of years but somehow managed to survive. Keso and company take it a year at a time.

When asked if they have some ideas where to go when Sompasauna is finally no more, Keso says optimistically, “We have a few places in mind, and sometimes for fun we look at Google maps in satellite view to see potential locations where we could set up.” 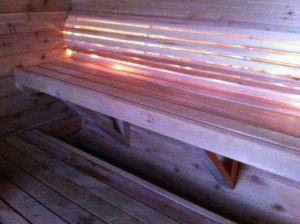 Sauna rules are few, as confirmed by Finland sauna guide 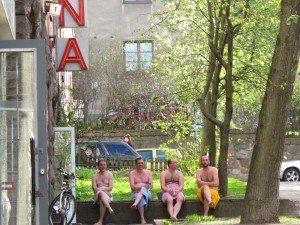 3 thoughts on “Helsinki “guerrilla sauna” pops up, is enjoyed, suffers arson, and gets rebuilt all under the radar but appreciated by authorities”