Sauna: the home improvement that's the hottest of them all

The Home Improvement That’s the Hottest of Them All

Saunas today are hot. Even in Texas.

James Hall, a civil-engineering consultant, relishes evenings spent in his backyard sanctuary. He shuts the door and cranks up the heat to about 200 degrees Fahrenheit.

“Afterwards you get a real calm feeling of well-being,” he says. 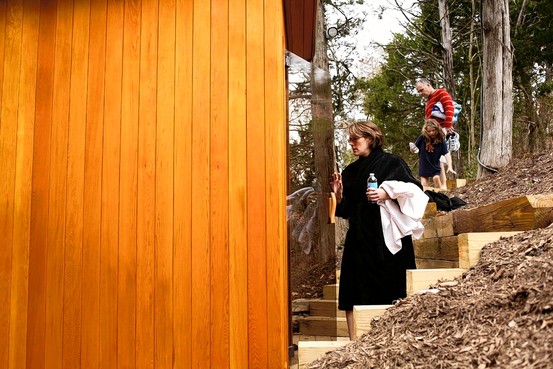 That may surprise some of Mr. Hall’s neighbors, who think that Dallas is often steamy enough. Mr. Hall says his sauna provides not only relaxation, but also a certain cachet with friends and colleagues. “We’ll have clients over and instead of going some place for happy hour, we’ll have a sauna, a couple beers,” he says. “People think it’s weird at first” but then are usually won over, he says.

Saunas have been at the core of Finnish culture for thousands of years, a traditional toasty respite in a cold and snowy climate, according to the nonprofit North American Sauna Society, whose members are fans and merchants. More Americans are making space for sauna rooms, clearing out basements, converting closets and even partitioning off backyard sheds. Florida Hot Tub and Sauna, of Ft. Lauderdale, says sauna sales this year are up as much as 40% over last year. Rozycki Woodworks, of Royalton, Minn., says sales of its handmade barrel-like outdoor saunas have been climbing about 6% a year for the past four years. Kalevi Ruuska, a Fishkill, N.Y., sauna dealer, says sales were up 50% this year.

“What I’m interested in is whether our American friends will sauna in the nude,” says Leslie Kahn, an architect in Bethesda, Md. She and her husband are remodeling a basement bathroom in order to add a sauna. Her husband believes sauna sessions he experienced overseas helped with aches and pains. The couple also enjoys the social aspect and hopes eventually to entertain guests with sauna parties. The cost of the sauna, including installation, will be around $5,000, on top of about $12,000 for remodeling the bathroom, she says.

Don Orlic, Roxanne Fischer and Elizabeth Orlic in the sauna. 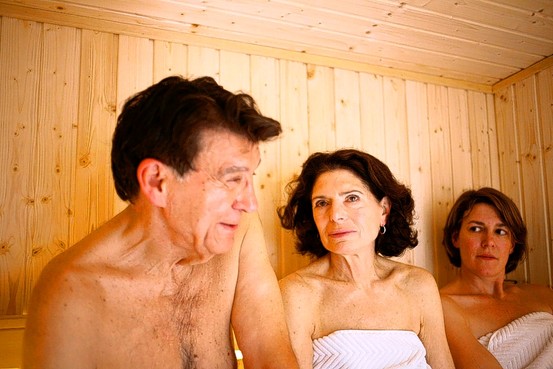 Besides the Euro-cool factor, saunas’ growing popularity also is due to their practical appeal. They are less fussy to install than other spa-type amenities. The source of their intense, radiant heat is simply stones placed inside and on top of an electric heater. Some outdoor units are set up with a traditional wood-burning stove, requiring no electricity for heating (just a good stack of firewood).

Whether indoors or out, saunas typically are built using a light-colored wood able to withstand wide fluctuations in heat and humidity. In the U.S., western red cedar is popular and releases a pleasant scent.

Although saunas can be enjoyed dry, many people like to add humidity by sprinkling water on the rocks. There’s no need to rejig water lines and plumbing—as homeowners often do when installing a jetted whirlpool tub—nor is there water quality to maintain, as with a hot tub.

Health concerns about jetted water in bubbly spa tubs may be also be helping saunas’ popularity. A 2000 study at Texas A & M University tested 43 water samples from whirlpool tubs in hotels and homes nationwide and found all had some form of microbial growth, such as fungi or staphylococcus. The reason: The water in the jet-spray pipes tends to get trapped, and bacteria may accumulate. When the jets are switched on, microbes are forcefully blown into the tub where a person is soaking, carried on a bubbly mist that can enter lungs or open cuts, says Rita Moyes, microbiology professor at Texas A&M. 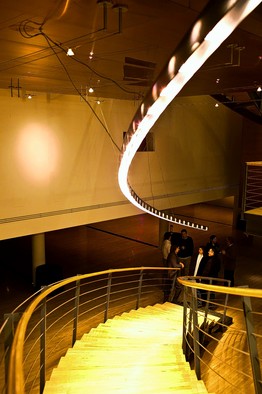 CREDIT: Stephen Voss for The Wall Street JournalGuests arrive for a sauna party at the Embassy of Finland in Washington, D.C.

A sauna can be relatively affordable. Converting a closet into a two-person sauna might cost as little as $3,000, not including installation, while a “designer deluxe” model with digital controls and high-end lighting could climb to $10,000, says Keith Raisanen, president of Saunatec Inc., a Cokato, Minn., manufacturer and distributor. Most saunas, he says, fall in the $4,500-to-$8,000 range and seat from four to seven.

In Washington, D.C., a 10-seat sauna in the basement of the Finnish embassy becomes an evening hotspot, where journalists and politicos mingle on Friday nights about twice a month. Embassy spokesman Kari Mokko says he limits invitations to about 15 each time and regularly changes the guest mix. “The demand is so high,” he says. The sauna was built into the embassy, which was completed in 1994. Parties, considered a useful vehicle for promoting Finnish culture, came soon after.

The room is walled in North Carolina white pine with benches made of cedar; it is heated to 190 degrees. Men sauna separately from women; each group takes its turn in an adjoining shower room. A buffet spread—think gravlax and meatballs in dill sauce— follows in an adjacent cocktail room, where a bartender serves vodka and cold beer.

Last fall, Don Orlic, a cardiovascular researcher, and Roxanne Fischer had an outdoor sauna built at their weekend retreat in Virginia’s Shenandoah Valley, in a free-standing cabin about 75 feet from the main house. Dr. Orlic digitally sets the temperature in the sauna from inside the main house, allowing 30 minutes for the sauna to reach as high as 180 degrees. He relaxes there for 20 to 30 minutes at a time. On cold winter days, he says, he loves the contrast of brisk air and penetrating heat. “I love to make margaritas and have our friends over,” Dr. Orlic says. “It’s a social thing.”

A tray of smoked salmon at the embassy party. 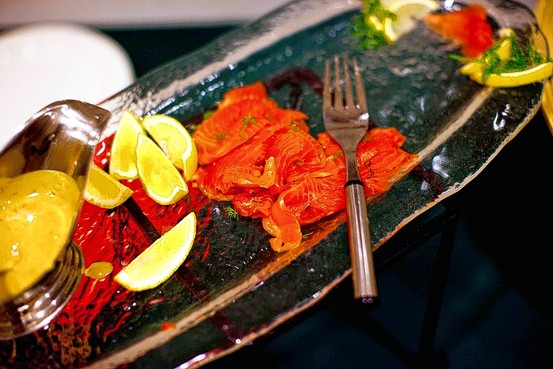 The sauna, which comfortably seats five, cost about $10,000 for the basic preassembled unit. Installation—including underground electric lines and plumbing for a nearby outdoor shower and other custom elements—drove the cost up to $25,000. Dr. Orlic hasn’t received his first post-installation electric bill yet. Art Glick, owner of sauna and hot tub distributor Almost Heaven Group, of Renick, W. Va., estimates a 5-foot-by-7-foot sauna might consume an average of five dollars a month in electricity.

Saunatec’s Mr. Raisanen, whose grandparents emigrated from Finland, says he and his wife like to take a sauna at night, set at 165 degrees for 15 to 20 minutes. “We like a lot of steam,” says Mr. Raisanen, who keeps a bucket and ladle next to the rocks.

A timer on the heater gets the sauna hot at 9:30 p.m. That’s an ideal time, he says: It’s a couple of hours after dinner (he advises against a sauna after a big meal), and the kids are in bed. Lights are kept low. “It’s really our cherished quiet time,” he says. “It’s a shut-the-door-to-the-rest-of-the-world-type thing.”

Inside the embassy sauna. 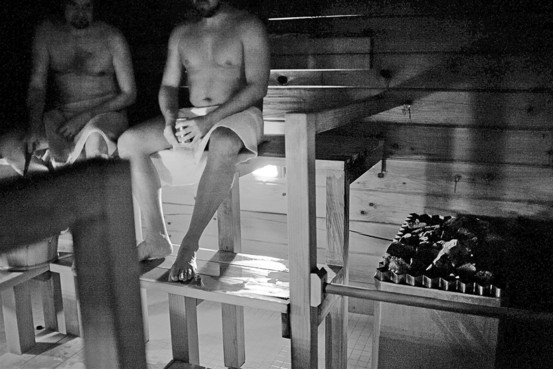 Mr. Raisanen sells prefabricated sauna units that can be assembled by a homeowner in hours and installed in a basement or workout room. His “custom cut” kits, in dimensions supplied by the customer, are made to be installed on pre-framed walls. Installation can be arranged through the dealer at extra cost, Mr. Raisanen says.

“Infrared” saunas, with heaters built into the walls, are a fast-growing part of his business, Mr. Raisanen says. They have caught consumers’ attention with lower prices: A two-person infrared unit might cost as little as $2,000. Humidity can’t be adjusted the old-fashioned way, because there are no rocks. And they don’t get as hot, a plus for some people.

There have been safety concerns about infrared technology, though. In 2008, the Consumer Product Safety Commission recalled about 225 infrared saunas after reports that some caught fire. Some distributors today refuse to sell infrared models. Others say the technology has improved. Initially reluctant to continue selling them, Mr. Raisanen says he has begun working with an exclusive supplier with high quality-control standards. 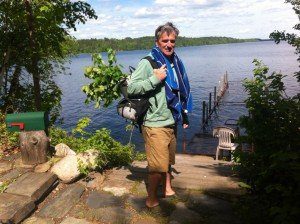 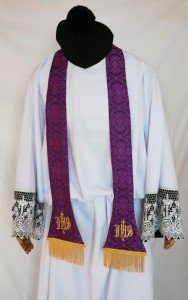 Heading to a sauna party? Follow these 7 tips and you won’t be left out in the cold

2 thoughts on “Sauna: the home improvement that's the hottest of them all”