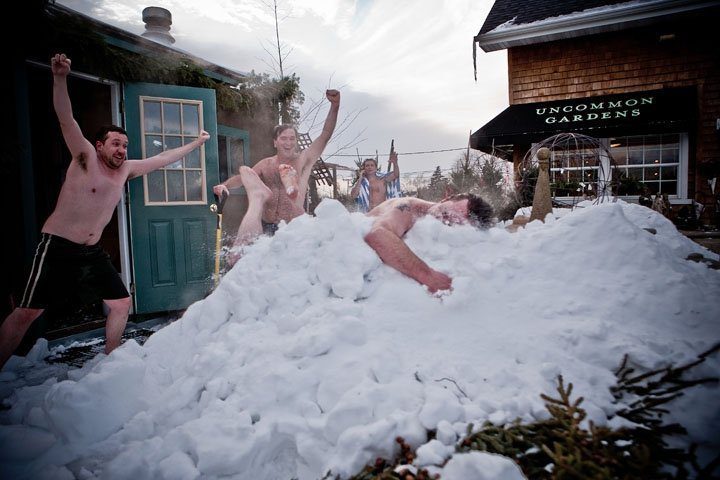 Yours truly was interviewed for a story in Minneapolis’  The Southwest Journal. Winter has set in heavily now.  It starts to get dark at 4 pm.  Most folks are cocooning inside.  There is a group of us, however, who are embracing winter with a smile, digging the authentic Finnish sauna scene and jumping (literally) into the snow.

Glenn Auerbach outside his mobile sauna.

KENNY — To say that Glenn Auerbach is enthusiastic about saunas would be an understatement.

He owns three saunas, has a special sauna blog called “The Sauna Times,” and belongs to an informal club of local sauna lovers he often has over for sauna parties in his backyard in the
Kenny neighborhood.

He takes saunas year around, usually three times a week, and often with his family — his two sons and wife. It serves as a special bonding time. His sauna ritual usually lasts anywhere from 90 minutes to three hours. To be truly authentic, the experience has to end with a blast of cold — usually a quick rinse under a shower or a leap into a snow pile.

“The fun thing about the sauna ritual is that there really is only one rule: ‘Close the sauna door!,” he said. “Outside of that, it’s a lesson in freedom. If you’re hot, you leave. If you get cold, you go in.”

He first became infatuated with saunas more than 25 years ago while traveling in Scandinavia. He was hitchhiking with a friend. The weather was cold and rainy. They were soaked, hungry and tired. A kind couple took pity on them and invited them over to their home to warm up. They were also encouraged to take a sauna at the couple’s house.

“The first blast of dry warm air felt wonderful against my clammy skin and as my tight muscles started to loosen up, I quickly realized that I just found heaven on earth, in a small cedar lined room in a little town in the middle of nowhere,” he wrote of the experience on his blog. “After a couple 15–20 minutes rounds, showering between, I felt clean, refreshed, and as an even unfathomable bonus, all our mosquito bites were miraculously gone.”

These days, Auerbach, 47, has become something of a sauna evangelist and would love to see a sauna movement catch on in Minneapolis. It’s not necessary to drive all the way to the north woods to enjoy the experience, he noted.

“I really think we are on the cusp of urban saunas,” he said. “It’s in our blood as Minnesotans. It’s bringing the up-north vibe to the backyard.”

Besides his backyard sauna, his family has a sauna at their cabin on Lake Vermilion in Tower, Minn. It features a stove made by an authentic Finnish stove maker. He also has a “mobile” sauna currently on display at Uncommon Gardens, 5750 Lyndale Ave. S. The sauna has been an attraction at events like the City of Lakes Loppet and the New Year’s Day Polar Plunge on Lake Minnetonka.

Auerbach has also found some kindred spirits who share his love of saunas.

Clint Carlson, an Armatage resident who has a sauna in his garage, found Auerbach by stumbling on his sauna blog. “I’m a sauna freak. I often go online and see what’s been happening in the news,” he said.

He started corresponding with Auerbach a couple of years ago and soon started going to his sauna gatherings.

“By far the best way to embrace the Minnesota winter is to own a sauna,” he said.

Tom Rolando, another friend of Auerbach’s, also connected with him through his blog, “Sauna Times.” He had Auerbach build him a sauna in his backyard in Maple Grove.

While many lament the piles of snow that have fallen on the Twin Cities in recent weeks, Rolando isn’t complaining. “The worse the weather, the better the sauna,” he said.

Auerbach says there a few things to keep in mind to ensure a good sauna experience. First, he said there’s something “magical” about allowing enough time for three complete sauna rounds. Round one is typically a dry round where water is slowly added to the sauna rocks (loyly); round two involves adding water to the sauna rocks right away to get a blast of steam going; and for the third round, you let your body relax completely and sweat away the toxins.

It’s important to stay hydrated during the process. Auerbach typically drinks at least a quart of water during a sauna session.

And finally, the cool down is key.

“People may think a true sauna enthusiast is crazy for jumping in the snow or jumping through a hole in the ice, but this is when magic happens,” he said. “In order to appreciate the heating up in the sauna, it’s critical to allow enough time for the body to cool down. I try to spend at least the same amount of time cooling down as I do heating up, even in winter with the steam billowing off my body.”

Besides being a good way to connect with loved ones and the benefits for the body — detoxification and improved circulation — the sauna experience helps calm the mind.

“It’s a meditative place,” Auerbach said. “We all need an escape.”

6 thoughts on “The sauna evangelist”