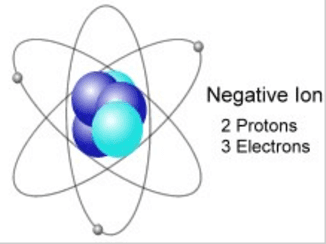 Guest post series continues. We are pleased to introduce Daniel Stroberger who will be bringing forth some technical insight regarding sauna. Daniel’s background and introduction is below. We have received several inquires about negative ions relative to the authentic sauna experience. Daniel brings us an in depth analysis of the existing research and some interesting observations for those of us interested in the topic of negative ions and sauna. Enter Daniel:

I find the topic of negative ions and health implications very interesting. It is a unique intersection of physics, chemistry, biology, and psychology.

When negative ions exist for a longer time in an enclosed space there is increased opportunity for interaction with the human body before the negative ions interact with a positive ion and become neutralized.

Wood is considered an insulator and by proxy carries a neutral electrical charge. Sauna interiors are mostly constructed of wood, so this could further promote the life of negative ions generated in a sauna environment. This potentially contributes to more interaction between negative ions and the human body.

Does a wood fire sauna stove differ from an electrical stove for negative ion generation when water is tossed on hot sauna rocks? There is a gap in the research in this area.

Some think negative ions are hocus pocus but as an engineering scholar, I think this is a provocation for further action.

Is there a negative ion detector, i.e. a chemical device? — Ion counters, unsure on accuracy and validity of measurements obtained with ion counter devices.

Article: Air ions and mood outcomes: a review and meta-analysis

No impact of negative ions on anxiety, mood, relaxation, and sleep was observed in many studies. Though some studies have found sauna usage with the presence of negative ions reduced seasonal affective disorder in many cases (good for northern states/countries that go through long and dark winters).  Negative air ionization was associated with lower depression scores particularly at higher exposure levels – still a preliminary conclusion.

Daniel’s bio: I am a Senior specializing in Mechanical Engineering at Twin Cities Engineering; an ABET-accredited program through Minnesota State University, Mankato. With a B.S. in Psychology, I am an accomplished scholar and have gained many academic accolades to date. I have a passion for gaining knowledge, innovation, and creating solutions. I am captivated by all things engineering and spend my time researching, tinkering, building computers, designing, and 3D printing. I enjoy philosophical discussions, playing board or video games with friends, and rock climbing.