Builder of a “Mobile Sauna Tiny House mash up” creates a mecca for hundreds of sauna lovers in Minneapolis, MN. 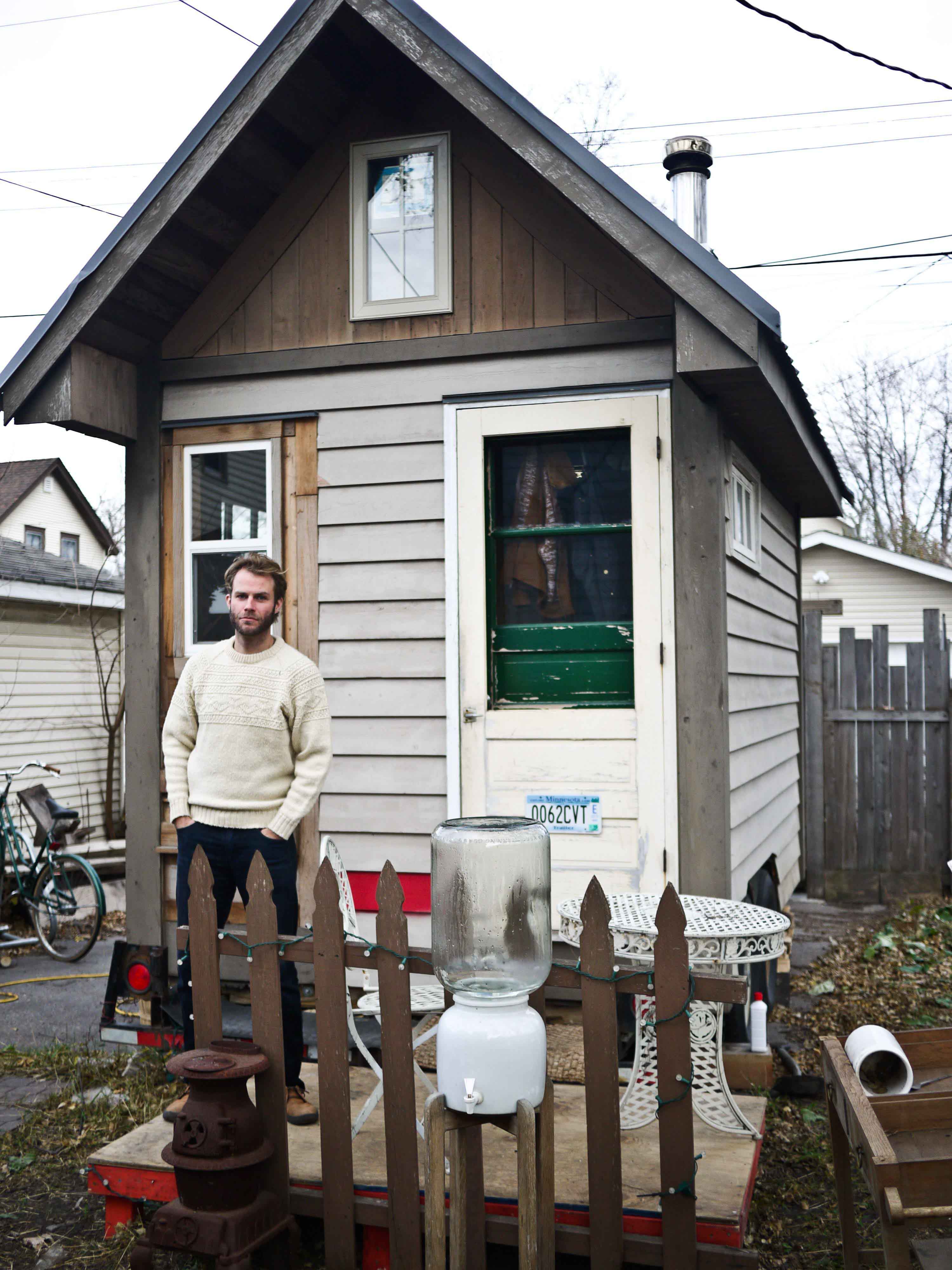 I am pleased to introduce JP, my close friend and 30 something protégé.  JP came into my life via a simple email then phone call, inquiring about how to build a sauna.  We hit it off immediately and I was pleased to offer him not just guidance but manual help with his sauna build.  JP is a smart, deep thinker who is very comfy living along the edge of the box .  He’s unpretentious – not all wrapped up with interjecting terms like “nonplussed” into everyday conversation.  He, like me, loves to be around Makers – folks who DIY because they can, not because it’s hip.
Enter JP:
Let’s start at the beginning.  Where did you grow up?  Schooling?

Well, I’ll tell you where I WISH I graduated from. I’ve heard of a saunameister school in Germany that has programs for bench-warmers like myself. UW Madison’s sauna program was pretty weak, so I opted for journalism for undergrad. However, next sauna season I’m going to pass around a hat for my sauna meister graduate school fund!

When and where were you first exposed to AUTHENTIC sauna?

Finland, of course. I landed a scholarship to spend the spring semester of my junior year of collage in Helsinki. I’ll never forget it. They picked us up at the airport and brought us directly to the public sauna. It was love at first sit! It quickly became a part of my daily life in Helsinki. I was surprised to find that each sauna was totally different. Often it was a special way to gather. We would gather at someone’s house for a sauna before a night out. It was a way to connect and sync up before we let loose. Other times it was a great way to be alone. I really missed that balance when I returned to UW. I think I’ve been looking for that well-rounded social scene ever since, which is why I started The 612 Sauna Society.

At what point – and what was the tipping point – for building your own mobile wood burning sauna?

It started as a Tiny House project. I soon realized that one of the biggest mistakes most people make on the Tiny House path is simply creating a miniature version of their current space. I think a Tiny House is an opportunity to make decisions and prioritize. Everything in your house should be beautiful or useful–that’s the Tiny House mantra. As I applied this thinking to my space, I decided to prioritize two things: creating a unique social space and special personal retreat. That focus eventually led to the mobile-sauna-tiny-house mashup now known as The Firehouse. Share with us an example of a stumbling block or two along your sauna building journey, and how you overcame the obstacle.
I didn’t have any tools. At first this seemed like a pretty big problem. But then I disovered The Hack Factory (a tool co-op in south MPLS). I talked them into letting me park my trailer in the alley. I showed up every day and made a fool of myself until someone walked by and said “You’re not really doing it that way, are you?” Just one year later, I had a mobile sauna to show for my efforts and embarrassments.
What tips would you give to other ‘amateur’ builders, given your experience and success with your sauna build?
Build your mobile sauna less than 13’6″ tall. It will make moving it much easier! If for some reason you decide to ignore that advice, you will need two things: a really long fishing pole and a pair of roller blades to measure every bridge and wire between your location and destination. Little brothers and best friends also come in very handy on moving day!
Lets dive a little deeper into the how’s and what’s of you authentic wood burning mobile sauna.  Did you start with a trailer? A tiny house frame or?
I started with a framed shed and a trailer (see pict below). I bought both off craigslist. It was a heavy duty tire-hauling trailer with 8′ steel railings. The first step was removing those railings. Sawing them off with a sawzall was the most difficult (or at least painful) step of the build process. It took an entire weekend. Turns out they invented something called welding for that type of job. Who knew!?I bought the framed shed separately. You know those days when you’re board at work and find yourself surfing the internet? I was having one of those days, except it got a little out of hand. One minute I’m on craigslist, the next I was in the suburbs buying a shed from a guy named Gary. I had no idea how to move it. No idea how to mobilize it, and no idea how I’d finish it. I blame my friend Jesse Eustis. He was there. What kind of friend lets a guy withdraw his life savings to buy an empty shack?! Well, that’s the kind of friend Jesse is, and I don’t know where I’d be without him!
Did you keep track on how much money you invested?
Lucky I did not. I may not be such a cheery saunameister if I did. I used a lot of scraps from the dumpster at The Hack Factory. Despite my thrifty ways, I’ve invested at least $10,000 in the project to-date, which reminds me, there is a donation box in the changing room (or my virtual donation box, paypal: johnrpederson@gmail.com). Do you ever fire up your sauna and not tell anybody because sometimes, like a long hike or bike ride, a Personal Retreat sauna is best experienced alone?
I don’t often plan for a solo sauna but it happens pretty often (because nobody shows up). Either way, it’s a win for JP. As long as I’m on the bench, I’m happy! Your mobile sauna is taller than 13’6″ so you have had to plan routes and measure bridges before trailering it around.  Do you think this constraint could actually be a blessing in disguise because it physically grounds not just your sauna but also your vahta tendencies?
Vahta tendencies, hu? Haha, yes, I have a very technical process for moving my sauna. It entails rollerblading the entire route with a 15′ pole and measuring every, wire, stoplight and branch along the route. It’s a huge pain in the ass, but as you suggested very grounding for my vahta tendencies ; ) I get all kinds of harassment in the line of duty (also good for my ayurvedic constitution). But it has worked so far (well, with just one exception, but that’s another story). I don’t know if it’s a blessing but it’s definitely a constraint that has kept me much more grounded in one location/neighborhood at a time. I have more motivation to stay and make a spot work than I would if the sauna were easier to move. The last location was a great example of that. In the end, it feels better for me to be in a place that I’ve invested a lot of time and effort creating—even if it still looks like a junkyard to everyone else.

You seem to be very open armed, welcoming the Minneapolis community and hosting sauna parties in your backyard this winter.  Did you keep track?  How many saunas?  How many different people came through your sauna?  From when to when?

I tried keeping track with a google doc. I love google docs, but they have no place in the sauna world. Then I tried keeping track with chalk on the changing room wall, which also didn’t work. After three-to-five rounds in the sauna, the part of my brain that can count to 6 isn’t even working! My guess would be around 800 people showed up for saunas this winter, and about a third of them were first-timers. As you will recall (and history shall remember) the 612 Sauna Society Grand Master Council declared January “Sauna Awareness Month.” I hosted saunas Monday – Friday for the entire month, plus a few special weekend gatherings. The sauna was full almost every night. A full sauna is 6 people x 3 groups/night x 22 days = 360 people in January alone. I think it’s safe to say that the 612 Sauna Society produced at least 75% of the sweat in south Minneapolis during January 2015!

Tell us a little about the process you developed and used for inviting folks to your sauna.

Most applicants hear back from The 612 Sauna Society selection committee within 2-3 months. 30 applicants matriculate to the Bud Svetland Memorial Olympics (a hunger-games-style winter games competition held annually in Helsinki, Finland. The two survivors earn a seat at The Firehouse. That’s the plan anyway. In the meanwhile, I just post a google doc to the facebook page.

Looking back on the experience, there’s probably many stories and memories that come to mind, but if you had to share one sauna gathering in particular, maybe as an example, please tell us a bit about it.  When was it, who showed, for how long, etc.

The Monthly Woman’s Sauna Nights really stand out. Molly Reichart hosted the first woman-only sauna back in December 2014. It was the first time I handed over the hosting duties to someone else. Since then, someone new has stepped forward each month to host and there has been a waiting list every month. These gatherings gave me a chance to step back and realize just how much this community loves and appreciates this tradition. It’s something that just needs and wants to happen here in 612. I’m just grateful to be a part of it (even when I’m exiled from my own sauna and just serving after-sauna snacks in my apartment).

Another sauna that stands out was the night my house was robbed while I was having a lovely evening in the sauna. I was probably the most relaxed robbery vicitm those cops ever interviewed!

Where are you right now?  And from 1-10, how badly do you wish there was an authentic sauna there with you?

I’m in Medellin, Colombia at the moment en route to Brazil. (Turns out that sauna isn’t the only way to deal with the cold!)

I don’t waste much energy missing sauna in the off-season. I just take it (or at least parts of it) with me wherever I go. For me, sauna is about hosting and hospitality. I really love those aspects of it. I love thinking about who’s coming and remembering funny things that happened the last time they came. I love starting the fire and chopping the wood, emptying the ashes from the stove, carrying the water, checking the outdoor shower, lighting the bonfire and candles, sweeping the floor, tidying the changing room, shoveling the walkway and steps. I love sitting in the sauna while guests arrive and listening to their chatter while they adjust to the space. When I’m not hosting sauna, I do my best to practice hospitality whoever I go, which keeps my fire burning even when I’m missing 612. 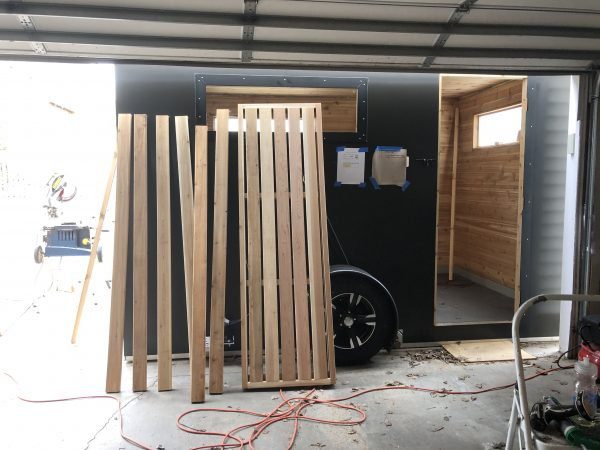 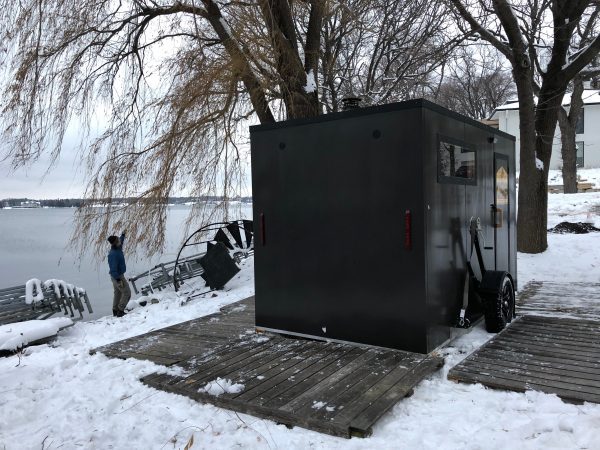 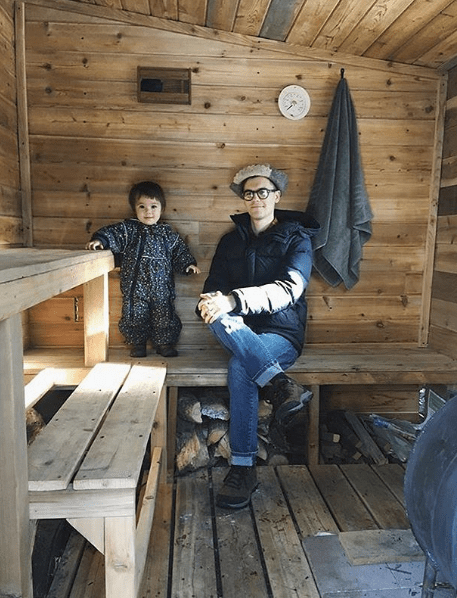 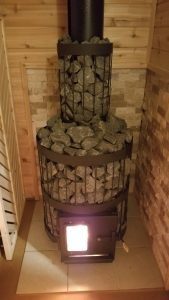 His Dad built a sauna in Germany, now he is hooked on having his own backyard wellness escape in Canada