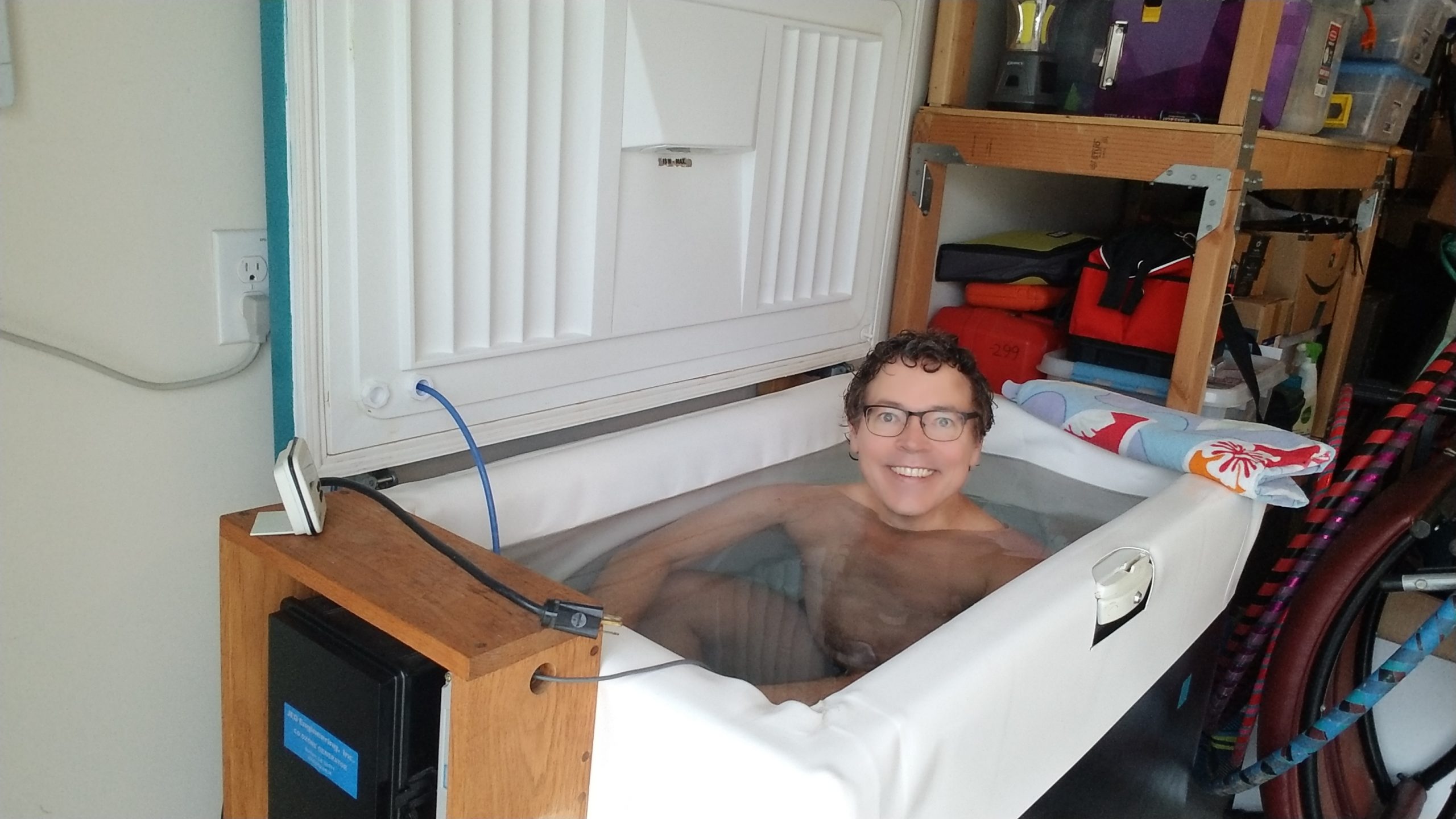 Hi John, welcome to saunatimes. I thought I’d start by having you share how and when you first got started with the WHM and cold water exposure.

Most of my life I’ve had a terrible relationship to the cold. I hated cold water and if it dropped below 60F I would bundle up like I was preparing for an Arctic adventure. In 2013, when a friend let me know about a Wim Hof workshop that was being held in Austin, all I saw was a picture of Wim sitting in a barrel of ice and though “No way!! Why would I pay money to go sit in ice water?!” My resistance was strong enough, however, that it made me curious, and I signed up. Those first two ice baths with Wim that weekend were miserable, but life-changing.

The big issue with living in central Texas – a sub-tropical climate – is that cold water is not readily available. It wasn’t until 3 years later after experiencing two years of brutal insomnia that I found the amazing benefits of a regular cold water practice. After spending thousands of dollars on various insomnia treatments from many different kinds of approaches and modalities – none of which provided any lasting benefit – a friend who is a Wim Hof Method instructor suggested that I try cold water immersion before bed.

I bought a hundred pound of ice, filled up my bathtub, and got the best night’s sleep I’d had in two years. I did that three more times before realizing that hauling ice was going to get expensive and take a lot of time. That’s what motivated me to look into other ways to get cold water.

What did your early cold plunge set up look like?

My cold plunge has been through a number of evolutions through the years. The very first thing I did after ice baths was buy a Whirlpool 15 cubic foot chest freezer and fill it with water. That was great until three days later I opened it up and discovered a few rivers of rust pouring out of the seams.

The ice chest freezer for cold plunge, why is it such a “winner” for DIY cold plunge enthusiasts?

People love DIY for a few different reasons. For many who don’t have the budget to buy a commercially made cold plunge, the DIY route is financially motivated.  A basic setup with a used chest freezer can be created for less than a few hundred dollars. Even a very well equipped high-end chest freezer setup can cost less – in some cases *way* less, than half of the commercially made models.

Let’s talk about your Chest Freezer Cold Plunge book, how did that come about?

After having a number of problems and issues with my chest freezer cold plunge experiments and finally getting it dialed in, I wanted to start a group where we could talk about various issues and brainstorm ideas. It only took a month or two before I noticed many people asking the same basic questions. So I wrote a FAQ. That expanded pretty quickly to 13 pages, and I still felt like it wasn’t detailed enough, so I decided to write a book. Editor’s note: Link to John’s book is here.

You have helped many others adapt their chest freezer for cold plunge, including the starting of your Facebook group. How did that start and how is that going?

When I started learning about converting a chest freezer into a cold plunge, there were maybe 30,000 people in the Wim Hof Method Facebook group, but only a few posts about chest freezers. And most of those posts were “Hey I did this!” but lacking “How I did this.” The posts were also hard to keep track of and follow with all of the other content being posted.

I had a sense that a separate group to discuss making a cold plunge from a chest freezer would be helpful. I asked one of the Wim Hof group admins if he would be OK with me starting a separate group. He said yes, and let me post a couple of messages about it. It grew from there.

“Contrast therapy” is a big thing. Please comment on sauna AND cold plunge, as peanut butter and jelly, or 1+1=3?

I love hot tubs and saunas. As I mentioned, I hated the cold for most of my life. When I was looking for apartments, my # 1 criteria after location was “Does it have a hot tub!” The last apartment I lived in for four years had a sauna, and I thought I was in heaven.

I don’t have one where I live now, but have experienced contrast therapy at a few resorts, spas, and natural springs that I have been to over the years. One of my goals is to add a sauna at home. I’ve read some of the research and know that the benefits are awesome. Contrast therapy provides a huge metabolic workout. I suspect that it is not a matter of either hot or cold, rather one of both hot and cold. I know cold by itself has tremendous benefits. Adding a sauna to that practice seems to have an exponential benefit. After reading Dr. Rhonda Patrick’s papers on heat shock and cold shock, I’m a believer in the value of both.