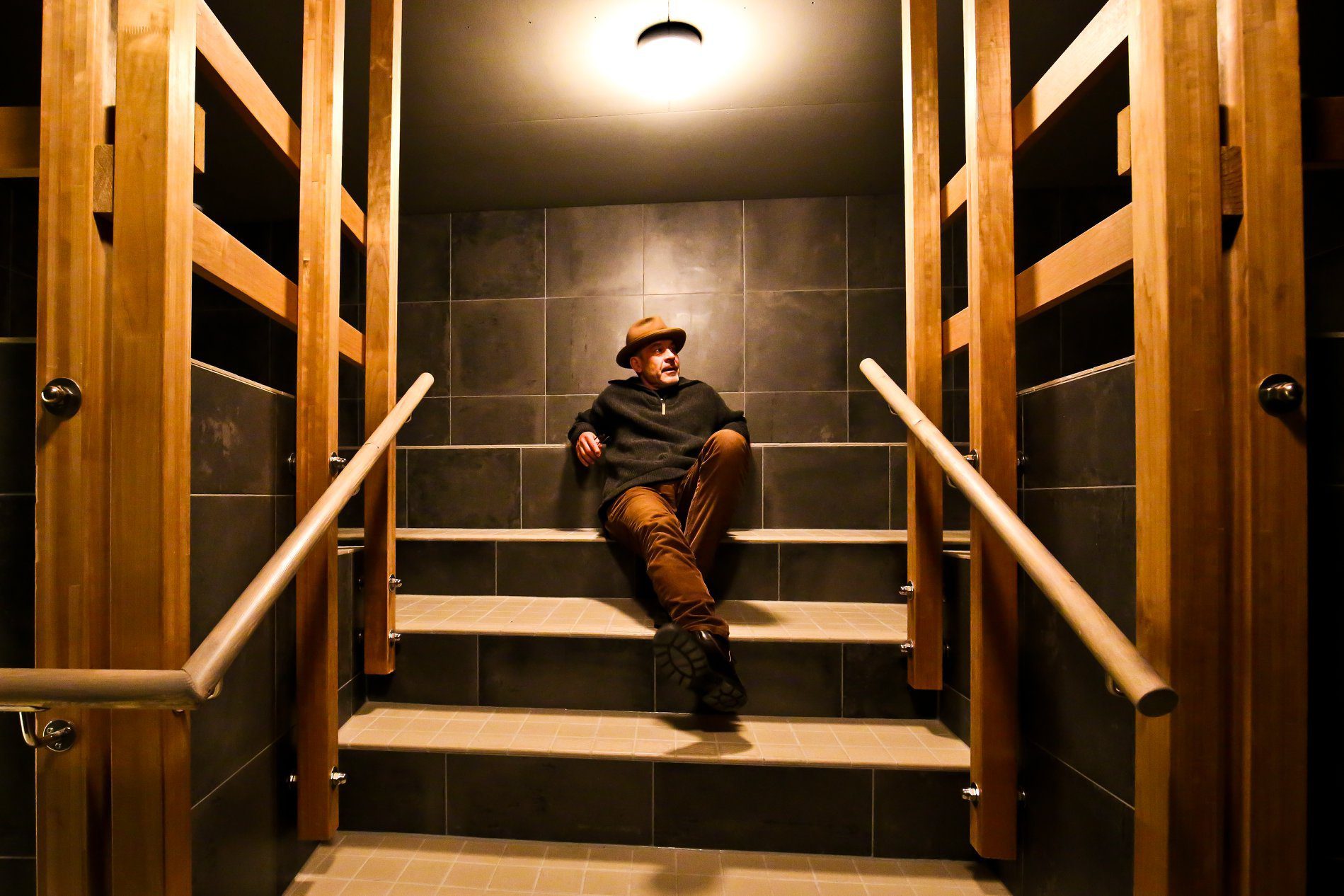 Today on sauna talk, i’m pleased to bring you Kimmo Helistö, leading operator and pioneer in urban public sauna. We are seated at his latest project, Uusi Sauna, a stylish contemporary public sauna in the “new downtown” area of Helsinki. Uusi offers 3 saunas and a bar and a kitchen. One sauna for men, one sauna for women, and one private sauna, electric for private functions.

“In Finland we have a system where Men go to sauna separate from Women.”

“If you are a sauna heavy user, you go naked to sauna.”

the birth of Uusi Sauna

The two main saunas are heated by wooden pellets and the private sauna is electric heated.

There were approximately 150 public saunas before World War II. Apartment buildings had only cold water. Bathing was all done, and happily achieved in these neighborhood, community saunas. Only two of the old saunas remain today:

Kimmo is a musician. A violinist and saxophone. Influenced by David Bowie and Roxie Music. Professional band in the early 1980s. The Lost Ones. Kadotetut – the name of the band. Punk/New Wave. Drums, base, keyboard, violinist, saxophone. He worked as a DJ and music producer, and journalist.

The squat house, the Bat Cave, had a sauna. They began activating sauna as part of a bar area, and introduced “strange and performing arts.” Tuesday was the most boring day of the week. Open for sauna 6 pm or so, for sauna. The bar was not too big, with one DJ, and a 20 square meter and shower room, and outside the shower room there was a changing area. No lockers, only a place to leave your things. 1995-1999.

The original way is the single burn system.

The 1930s started the creation of the continuous burn sauna.

There was lots of people doing this kind of work. The city of Helsinki little by little started to support the squat house, the Bat Cave. The stove, perhaps, was sponsored by Aito Kiuas. “there were very clever people at the time, who knew how to ask for things.

After 1999, he helped make sauna in a big tent at a festival in Helsinki.

5-6 day sauna party on the rooftop. Finn Air helped sponsor, so they were able to bring the Kiuas from Finland on a Finn Air flight. There was no profit, but it was a really good party for one week.

April 2001, they did the party again, and it was a really good sauna. A big Harvia stove. A Russian military tent, holding many people. Multiple bench heights. After the first New York happening, they realized that this was a great concept.

The layout of these pop up sauna villages, two main tents. One for sauna, the other for DJ and bar. 25 square meter hot room with sauna stove and stadium benches.

Sauna is a personal thing. When you’re hot you can leave. Nobody deciding these things.

In 2006, Arla Sauna was a forgotten sauna. Almost dead and gone. An older guy was running it. He was 70 years old and the sauna was in bad shape. The original kiuas. A huge brick made kiuas. It was changed in 1970 to city gas. A clever change. Kimmo fell in love with this sauna. He would go every week. He asked Kimmo to take over the sauna. Little by little, he started to improve Sauna Arlo. He helped build the spirit of the place. Little by little, the business improved.

Local people referred the organizers to Kimmo. What a great opportunity to build a new public sauna. $2mm to build a new sauna. The owner of the location is an insurance company. Kimmo is renting the space from them.

Little by little. Step by step. There is not that kind of knowledge about running a public sauna. It all started from the squat house, to the pop up sauna, to New York. We have a small jewel in their hands.

A modern system in that he lights the stove at 7 am. biked home and sat with his cats and paid some bills. He returned to the sauna at 10 am. He met with a record label for his music production.

Kimmo lists the 8 public saunas currently in operation in Helsinki. He thinks Helsinki can support 20 public saunas. And this will be busy. Everybody is helping each other. More people come to sauna, the more people sauna and people suggest going to other saunas.

The feeling of collaboration with other public saunas.

When you go to sauna, you should only listen to yourself. Not try to be there too long time. Drink some water and try it again. You should allow time for yourself. Listen to your heart of your feelings.

Shout out to Kimmo Ratio, Sauna Sherpa, for setting up this interview.