Sauna Talk with Sauna Timo, Who Has Come Back To Life More Passionate About Sauna Than Before his Fatal Accident at the 2010 Sauna World Championships

The story is known by just about everyone in Finland, and for that matter, also well known in Russia and all other countries where sauna is more popular than here in USA.

It was the 2010 Sauna World Championships. The two finalists had worked their way through 130 other contestants, two days of grueling single elimination “who can outlast the other on the sauna bench” brackets. And only two men were left standing: Russia’s Vladimir Ladyzhenskiy and Finland’s Timo Kaukonen, soon to be known everywhere as Sauna Timo.

To set the stage of the final round, rules in the competition required the sauna to be heated to 110 C (230 F). Water was added to the sauna stones every 30 seconds and the last person to remain in the sauna would win.

Competitors were required to verify their condition by giving a thumbs up to judges when asked, and be able to leave the sauna unaided.

Kaukonen is a five-time winner of the event and reigning champion, while Ladyzhenskiy is believed to have come third in last year’s contest.

So, into the sauna the two went. At about the 6 minute mark, judges noticed that things were going terribly wrong. The Russian competitor was cooked, literally. Passed out and dead. The Finland competitor, Sauna Timo, was helped out of the sauna and rushed to hospital. 3 weeks in a coma, operations, skin grafts, yucky stuff and a painful recovery.

Turns out the Russian was cheating. Before the contest, he had applied ointment to his skin to mask the pain from the intense heat. That move is probably what killed him.

Sauna Timo has written a book about his experience and during this interview, you’ll hear about what he remembers about the contest (nothing) as well as his recovery and return to the sauna bench. Kindred spirits on the sauna bench, Sauna Timo brings to our visit a continued lifelong passion for sauna. His English is just a bit better than my Finnish, which is not saying much at all. Thanks to Samuli from Iki Stoves, for translating.

We gather at Samuli’s Helsinki residence on the shores of the Baltic Sea. We enjoy Sauna Talk with a couple of beers and Samuli grilling out for us in the shadows of his Sauna Tent, heated, of course, by an Iki wood fired sauna stove.

The manufacturer for the tents is a small company, Mikkeli Joretuote Oy. Sauna tents are a great work around for building code restrictions and setback restrictions. Samuli’s sauna is a temporary structure, after all.

We are excited to bring you this moment, a sauna with a legend, A warrior. A hero in Finland. A fair sauna competitor and a kind soul. Sauna Timo. 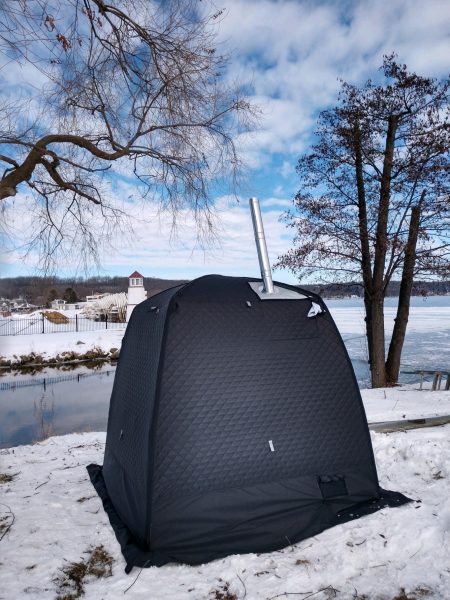 3 thoughts on “Sauna Talk with Sauna Timo, Who Has Come Back To Life More Passionate About Sauna Than Before his Fatal Accident at the 2010 Sauna World Championships”