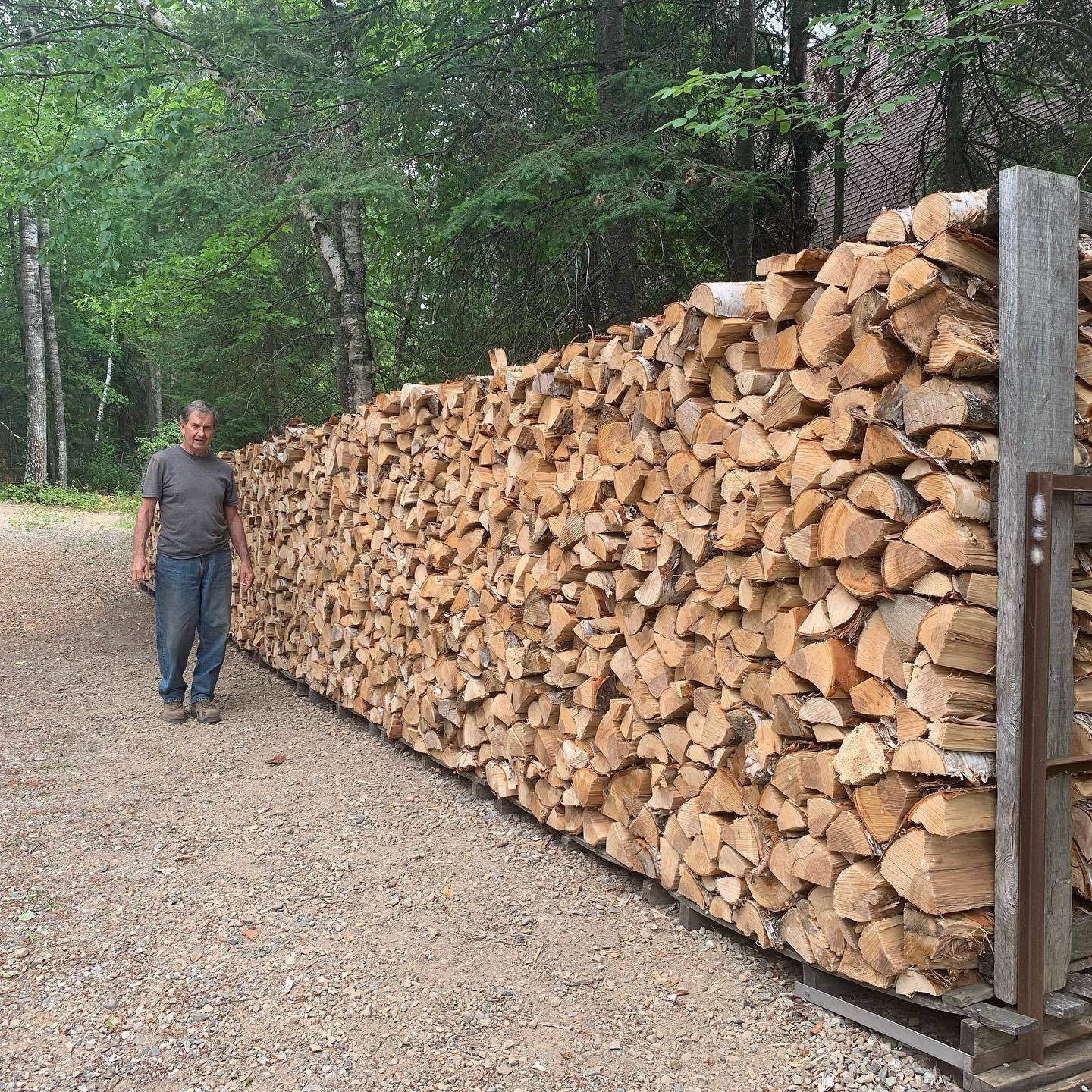 I’m pleased to present my second Sauna Talk podcast interview with Daryl Lamppa. My first interview from 2016 is here. So, who is Daryl Lamppa? He is a third generation sauna stove builder, born and bread in Tower, Minnesota. 100% Finn, and married to a 100% Finn, Cheryl. After marriage, as a young man, Daryl and his father in law built their newlywed house, and milled lumber for the build from Norway pines on their property. Daryl and Cheryl have lived in this house their entire adult lives.

Over thirty years ago, I recently moved to the area, having bought an island on Lake Vermilion, just outside Tower, MN. The area reminded me of the Baltic Archipelago, with birches and pines, islands dotting the shoreline with hard rock granite outcroppings. I had a clear focus to build my first sauna, back then, in 1989, to recreate the awesome experience I had helping rebuild a cottage on the Baltic Archipelago.

As luck or fate would have it. Soon after purchasing my island, I learned about a small company in town that made sauna stoves. I walked into the tiny Lamppa Manufacturing facility and met Daryl Lamppa. To know Daryl back then was to know a man who most of the time was hidden behind his welders face shield. He wore a coat, that was completely covered in black and burned from heavy use and welding sparks. Back then, Daryl did all the welds for his stoves. And the welds were perfect.

I got into into sauna building in large part part because of the Kuuma stove. Thanks to the Kuuma I was able to finally experience the quality of heat that I knew so well from my time on the Baltic.

Meeting up with Daryl Lamppa

There I was in my fishing boat, heading for my visit with my friend and wood burning sauna devotee Daryl Lamppa. About midway across Big Bay, the irony of the moment hit me. Here in the Northland of Minnesota, it has been an unseasonably hot and dry summer. Forest fires in Canada and super warm calm weather had created a gloomy hazy hot atmosphere for my boat ride. The smell of smoke was strong., and here I was, heading to meet one of the world’s premier experts on clean burning wood.

As I tied up to Daryl’s dock, I couldn’t help but take notice of his custom dock frame. Nobody builds a dock like this, I thought. The welds were uniform and clean. The dock frame design was criss crossed and laid out perfectly spaced. This was a hand made dock of shiny stainless steel. The dock could have been five years old or 55 years old. Nobody builds docks like this. Well nobody except Daryl Lamppa.

Daryl greets me from his back door, and we head over to his sauna. Part of the purpose of my visit is to develop a plan for fixing up the Lamppa homestead sauna. The Cobbler’s kid’s shoes syndrome is in full effect as the sauna is a neglected relic from the 1930s, maybe earlier. Toys for the grandkids are stored in the cool down room. “This was the sauna for the resort that used to be here that was part of this land when we bought it.” We talk through our plan on how to remove the old hand built beast of a stove, and what to do about the original wall paneling and benches. “We can take apart the benches and just flip over the boards. Maybe sand them a bit.”

We turn our attention to his house. I’m pretty sure it’s the house he and his wife Cheryl moved into when they were married. Daryl and his father in law built the house, by hand, using lumber milled from the trees taken from the property. And we are talking big Norways and White Pine. Daryl is all Finnish. All matter of fact. Simple short sentences that tell a story. “He was a tree cutter. We took down these trees ourselves. We had lumber milled from these big trees. It was a lot of work.”

Next I’m drawn to his woodpile, two woodpiles, actually. One neat stack left and right, guarding his driveway. Each pile is stacked perfectly. “That’s 5 cords each. We heat our house all winter with 5 cords. Pointing to the left: “I’ll bring all this down to the basement in the fall. And this over here, well, i just stacked this pile a few weeks ago. These are for next winter.”

“Birch is the best.” He tells me, and of course, I’m nodding in agreement. “I want about 20% moisture. The heat is in the gasses. Wood that’s too dry doesn’t produce as much heat.”

Off to the old factory

We hop in Daryl’s pickup truck. “Nice truck” I say. “It’s from 2003, and has 23,000 miles on it. I only drive it to the shop and back, and maybe church, that’s about it.” I ask him if his truck has ever been to Minneapolis: “No.” The original Lamppa Manufacturing building sits in a residential neighborhood just a couple blocks off Main Street, Tower, Minnesota. (Population 500). Daryl’s Father ran the family milk distribution company out of this building originally. Then it moved over to full time sauna stove building in 1974.

The building sits virtually empty now, as the entire operation has moved across town. The items in the building today are very few. There’s a clock on the wall (circa 1974), and an old radio (circa 1974) that Daryl turns on by plugging it in. Two chairs are positioned about 6 feet away from Daryl’s most recent Kuuma, and he has been working in secret and solitude on improving the burning efficiency and method of his Kuuma sauna stove. This one looks like any other other Kuuma, but Daryl is deep into the testing of this one. He takes only a couple sentences to warm up to me, knowing how much I love Sauna Talk, and wood burning technology, particularly. And Daryl is comfortable here, in his old factory, where he has spent most his life welding, cutting, and constructing thousands of Kuumas. I know most who own a Kuuma would get a chuckle on “how could you make a Kuuma any better?” But that’s Daryl. A life long dedication to his craft.

I am overjoyed to call Daryl Lamppa my friend. And before I turn it over to this interview, three things.

First, Daryl’s son Garrett has recently left his post as Hospitality Director at the area casino resort in town to come over as Director of Operations, full time, as fourth generation sauna stove builder. You’ll hear what Daryl thinks of his son’s transition to the family business (a very Finnish answer!). For me, I am overjoyed that Lamppa Manufacturing is in great position to remain 100% family owned and operated. A big credit for helping shore up Lamppa Manufacturing is Operations Manager Dale Horahan. Dale, as good fate would have it, moved to the area with his wife about 10 years ago, with an idea of retirement.

At that time, Garrett showed not much interest in the business, and Dale was thinking of selling out. The company just couldn’t make money, and, frankly, the hard manual business of making stoves was taking its toll on Daryl’s knees and spirit. Dale has spent his career in manufacturing and building businesses. Dale and Daryl met a few times with an idea towards Dale taking over Lamppa Manufacturing. Dale, though, had higher aspirations and, like me, felt a higher spirit towards Lamppa Manufacturing. Dale’s list of contributions to helping Lamppa Manufacturing are too long to list here. He helped transition the company from the old building to a new building, streamlined operations, hired more quality help, and countless other critical contributions, without which Lamppa Manufacturing may not have made it to the solid enterprise that it is today.

The second piece I’d like to share is that, in full disclosure, I am a reseller of the Kuuma stove. My title for the company is Director of Sales. This is not a full time position. Like Dale, my devotion is to help grow Lamppa Manufacturing as a healthy, family owned company. A good employer in the community, and sharing the good heat, as the producer of the most kick ass sauna stove in the world.

What others say about the Kuuma stove

August 19, 2022: Who has a kuuma stove ? How do you like it, are there any stoves in the same price point that you wish you would have purchased instead? I’d like to read some of the comments,..

There are 50 other comments, all sharing the same spirit.